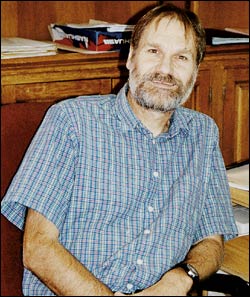 Ekama, also head of the civil engineering department, and his team seek to develop an understanding of the fundamental chemical, physical and biological processes operating in various water related systems such as water storage, transport and treatment plants.

"The WRG, which includes Associate Professors Mark Wentzel and Dick Loewenthal and laboratory manager Talip Lakay, is an interdisciplinary one involving students from various departments," said Ekama. "In the 25 years of its existence, 63 students have obtained their MSc degrees and 19 their PhDs.

"Our staff and postgraduate research students have published twelve monographs, including software for the modelling and analysis of biological and chemical processes, over 150 journal and 70 conference papers on wastewater treatment," he added.

In 1972, the Water Research Commission was brought to life by the Department of Water Affairs. The Commission receives funding from a levy on water used by farmers and individuals, generating approximately R70-million a year, which is allocated to water research.

Designated a centre of expertise by the Commission, the WRG receives support from the Commission through contract research and the National Research Foundation (NRF) under its Distinct SA Research Opportunities and Sustainable Livelihoods research focus areas.

The novel integration of the newer biological nutrient (nitrogen and phosphorus) removal activated sludge system and the older trickling filter system is a current research area of the WRG.

Until the mid 1970s, trickling filters were used to treat wastewater in South Africa. This fixed media system involved the use of big, round tanks filled with stones. Bacteria grow on the stones and as the water runs over the stones it is treated.

"The problem with the trickling filter, which is the reason it fell into disuse in the 1970s and 1980s, is that it does not remove the nitrogen and phosphorous nutrients from the wastewater," explained Ekama. "The activated sludge system became the preferred treatment system, because it could remove the nitrogen."

A suspended media technique, the activated sludge system allows bacteria to grow while swimming around in the water, which is to be treated.

With activated sludge systems and trickling filter systems operating together at many wastewater treatment plants in South Africa, the WRG believes these two systems can be integrated to obtain biological nutrient removal on the full wastewater flow at a reduced treatment cost, which would be of great benefit to municipalities and the receiving waters.

Ekama pointed out that in order to appreciate the significance of this, the surface water quality problems South Africa faces, particularly Gauteng, where 50% of South Africa's gross domestic product is generated, need to be understood.

"Most international industrial regions are built near rivers or at the coast. Gauteng, situated on the Highveld, is troublesome because it is where the three main rivers that drain across South Africa have their headwaters. Any pollution generated in the Gauteng area will have an impact on the full river system, including all the dams, and not just a particular part of the river."

According to Ekama, eutrophication (the growth of algae in water) stimulated by the nutrients nitrogen and phosphorus, and salination (the build up of salt or total dissolved solids in water) through the high indirect reuse of surface water in Gauteng, are the two main concerns for South Africa's surface water quality.

"Biological nitrogen removal was never a major problem because it could be accommodated in the activated sludge system without much difficulty.

"Phosphorous removal, on the other hand, was a big headache because up until 1975, it could only be removed from the water by adding chemicals. This would add thousands of tons of salt per annum to the treated surface water exacerbating the salination problem.

"In 1972, the policy guiding research was wastewater reclamation - if we were going to the expense of chemical phosphorus removal, we may as well completely reclaim the wastewater to augment potable water supplies. In this way, reduced volumes of treated effluents would be discharged to the surface water."

When in 1975, the Johannesburg City Council (at one of their full-scale activated sludge plants) and Dr James Barnard and his research group at the National Institute for Water Research, together with the WRG at UCT, found that phosphorous could be removed biologically in activated sludge systems, it provided a treatment system that could deal with the eutrophication problem without exacerbating the salination problem.

"Since 1980, biological nitrogen and phosphorous removal activated sludge systems have been built in South Africa," said Ekama. "UCT's name has been around the world because it has a biological nitrogen and phosphorus removal activated sludge system configuration named after it, called the University of Cape Town Process. Go to any conference on wastewater treatment and there will be a couple of papers discussing this system."

For many wastewater plants currently still using trickling filter systems to treat a part of its wastewater flow, the WRG has developed an external nitrification system that integrates the older trickling filters into the biological nutrient removal activated sludge system using the strengths of both.

A re-engineered combination of the two systems is important because removing phosphorous chemically not only costs money but also adds to the salt load of the receiving water, said Ekama.

After five years of laboratory testing at UCT, the system now begins a two-year trial period at the Daspoort wastewater treatment plant, in the Tshwane or greater Pretoria Municipal area, where some of the pilot scale trials were done in the early days of biological phosphorous removal.

The project has received acclaim as a finalist in the Technology and Human Resource Improvement Programme (THRIP) excellence awards and is supported by Water Sanitation Services South Africa, a subsidiary of Ondeo Services, Paris.

Ekama has been with the department of civil engineering since 1975, when he was still a postgraduate student. He was appointed a professor of water quality engineering in 1991 and has been head of department since the beginning of this year.