Tribute to a man who put UCT on the world stage 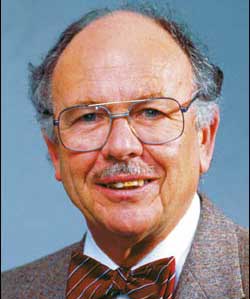 UCT is sad to report the death of a much-loved and respected academic and researcher, anaesthetist Professor Gaisford (Gai) Harrison (1926-2003), a man who had "a remarkable career".

Harrison was born in Cape Town and attended school at St Aidan's College, Grahamstown, returning to Cape Town as a medical student at UCT. After graduating in 1948 he entered general practice before commencing his training in anaesthesia at Groote Schuur Hospital (GSH) in 1951. Harrison completed his training in the United Kingdom, obtaining the FFA RCS specialist diploma in 1955. He returned to Cape Town to embark on a remarkable career in academic anaesthesia.

At the time when Harrison commenced his anaesthetic career, anaesthesia was a dangerous business, with a mortality rate from anaesthesia of the order of one death for every thousand anaesthetics performed.

Harrison had wide interests within the speciality, including a major interest in the incidence and causes of anaesthetic mortality. In a remarkable and unique study, conducted over 30 years, he documented the dramatic improvements in the safety of anaesthesia across this time span.

This work, for which he was awarded his doctoral thesis in 1966, became a standard reference for all papers dealing with the incidence and causes of anaesthetic mortality, and established his reputation, and that of the UCT Department of Anaesthesia, worldwide.

However, the field for which Harrison became most widely renowned was the relatively esoteric problem of malignant hyperthermia. This rare genetic condition produces a potentially lethal reaction in affected individuals when they are exposed to certain anaesthetic agents. Harrison described the first valid animal model for the study of this condition in the laboratory, and his research subsequently demonstrated much of the biochemistry and genetic background to this rare but frequently fatal condition.

On the basis of his research, he proceeded to experiment with the intracellular calcium antagonist, dantrolene, in his animal model, and was able to demonstrate that this therapy was lifesaving, reducing the mortality of attacks from 70-80% to virtually zero. So effective is this treatment, that it is now mandatory for all hospitals performing anaesthesia to have access to supplies of dantrolene. The original paper, describing his observations on the development of malignant hyperthermia in the Landrace swine, has become one of the most widely quoted papers in the medical literature and is now a citation classic.

In 1977 UCT conferred the degree of Doctor of Science in Medicine upon him for his scientific research into the safety of anaesthesia and made him a Life Fellow. He received many other national and international awards for his work, including the Medical Association of South Africa's (MASA) Hamilton Maynard Medal, honorary membership of the Australasian and Zimbabwe Associations of Anaesthetists, Honorary Life Member of Medical Association of SA 1990, FFARCS (Hon Causa) 1990, and the MASA Medal in 1991.

In addition to his remarkable academic achievements, Harrison provided leadership in the Department of Anaesthesia at UCT, where he was appointed as an associate professor in 1973, and was professor and head of the department from 1981 until his retirement in 1987.

Following his formal retirement, he continued to be actively involved in teaching and research. He finally retired from his sessional appointment at GSH after 51 years on the staff of the department. Harrison was also highly active in the College of Medicine and the South African Society of Anaesthesiologists, from whom he received a citation in recognition of his remarkable achievements.

Harrison will be fondly remembered for his warmth and compassion as well as for his intellectual achievements. His academic contributions placed the Department of Anaesthesia on the world stage, and his achievements in the department were an inspiration to generations of young academic anaesthetists. He is survived by his wife Mary and three children, one of whom is an anaesthetist.