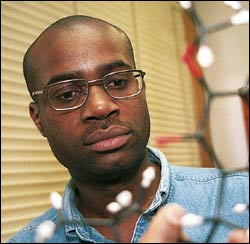 The right chemistry: Dr Kelly Chibale delivered one of the plenary lectures at a major international conference on TB drug development.

Organic chemist Dr Kelly Chibale travelled to the UK recently to share some thoughts on the development of new anti-tuberculosis drugs with international peers and the English press.

Chibale, a senior lecturer in the Department of Chemistry, firstly delivered an invited plenary lecture at the prestigious Gordon Research Conference on Tuberculosis Drug Development, hosted in Oxford in the United Kingdom. Then at a later media roundtable, hosted by the Global Alliance for TB Drug Development (aka the TB Alliance), he and other researchers conferred on the progress made in the development of new chemotherapeutic agents to treat TB.

In his plenary lecture, Chibale talked on ways to accelerate the identification of suitable compounds for development as potential anti-TB drugs. Here he pointed to his work, financed for the past four years by pharmaceutical giant GlaxoSmithKline (UK), to build a library of chemical compounds that target specific enzymes in Mycobacterium tuberculosis, the causative agent for TB.

The company recently renewed his funding to support a PhD student over the next three years.

Working with biologists, the quest is to find compounds that can quickly and cheaply be turned into potential drugs, Chibale explained. "Among other things, my work as a synthetic organic chemist involves developing shorter synthetic routes to build the molecules that may act as cheap and effective anti-TB enzyme inhibitors. "In drug discovery, what you want to do is speed up the process of deciding which class of molecules you should focus on. You must quickly get to the stage where you can say that a specific compound gives confidence that a pre-clinical candidate will be found.

"There is a check-list of criteria to be met for a compound to give this confidence."

Following his engagement at the conference, Chibale was spirited away to Oxford's swanky Randolph Hotel for a media roundtable. Here he and five other scientists - including Professor Valerie Mizrahi of the University of the Witwatersrand - and executives spoke further on the global drive to develop anti-TB drugs.

Nature Reviews Drug Discovery, Dow Jones Newswires, New Scientist and Financial Times were among the publications at the session.

Chibale was joined at the Gordon Research Conference by MSc student, Mengisteab Bereketeab, who had scooped a grant from the TB Alliance to attend the meeting and present a poster.