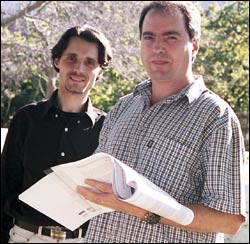 Conservation partnership: UCT's Assoc Prof Dave Richardson (right) and postdoctoral fellow Mathieu Rouget, have worked to put together a conservation plan for the Indian Ocean island, La RÃ©union, at the behest of the French government and with funding from the NRF and French sources.

With funding from the National Research Foundation and the French Ministry of Foreign Affairs, UCT and French researchers have collaborated to devise a conservation plan for the Indian Ocean island of La RÃ©union's rich plant species. This knowledge transfer paves the way for similar initiatives elsewhere on the sub-continent.

Across the broad expanse of the Indian Ocean, skipping the bulk of Madagascar, is the volcanic isle of La RÃ©union - rugged and isolated and one of the world's 25 biodiversity hotspots. But until recently it was an island without a conservation plan.

The island's authorities were also under considerable pressure by the French government (La RÃ©union is one of 14 French regions) to identify suitable areas for national parks and other protected areas.

This resulted in an interesting collaboration between UCT and French researchers via an agreement co-financed by South Africa's National Research Foundation (NRF) and the French Ministry of Foreign Affairs, working with the University of La RÃ©union. Their brief? To devise a plan to conserve the island's special biota with its rich variety of endemic plant and animal species.

The researchers' study is the first spatially explicit assessment of habitat diversity and transformation in La RÃ©union.

"Sophisticated techniques were needed to assess the status of protection of the island's unique habitats," said Richardson, who is also deputy director of the institute.

Rouget, fortuitously, graduated from the University of La RÃ©union and his mother-tongue skills and knowledge of the island have been especially valuable to the project.

Lying on the submarine Mascarene Plateau, La RÃ©union is one of three islands that make up the Mascarene Islands, east of Madagascar. (The others are Rodrigues and Mauritius.) The islands were apparently known to Arab traders but were officially discovered by the Portuguese at the beginning of the sixth century. They were named after Pedros Mascarentas, who visited these pinpricks of land in the vast Indian Ocean in 1512.

Unlike Mauritius, La RÃ©union is a volcanic island dominated by two large peaks, one of which is Piton de la Fournaise, one of the world's most active volcanoes. It is home to an eclectic mix of people, including Indians, Chinese and French-speaking Europeans.

These islands are unique, and due to their isolation, possess many endemic species. But the effects of hunting, species introductions, deforestation, farming and urbanisation have dramatically changed the habitats and caused the extinction of species. Many surviving endemic Mascarene species are seriously threatened.

As with all islands, La RÃ©union faces many threats, including severe and rapidly escalating impacts due to invasive alien species. A reported 30 out of 45 native terrestrial vertebrates have become extinct since European occupation of the island.

The flora, originally comprising 500 native species, is now dominated by 2 000 introduced species of which about 628 are naturalised and 62 highly invasive.

"La RÃ©union is by far the most intact habitat of the three Mascarene Islands, but its natural habitats are under siege from urbanisation, agriculture and alien plant invasions," Richardson explained. And although La RÃ©union has no formal conservation areas, it has by far the largest area of relatively intact habitat of the Mascarene islands. This is largely due to its rugged topography, which has precluded agriculture and other forms of land use in some habitats.

"But the opportunities for preserving tracts of Mascarene ecosystems on La RÃ©union are very good," Richardson added. Most importantly, with a proper network of conserved areas, La RÃ©union could also serve as a benchmark for restoration of habitats on other south western Indian Ocean Islands, he said.

Richardson and Rouget began their work with mandatory consultations in the capital of Saint Denis, where they hosted a number of workshops and meetings with interested and affected parties.

But they faced a number of hurdles. Details and maps of the islands were sparse. Their first task was to produce a map of the island dividing it into manageable habitats. As little information was available on the island's former natural state, they revisited important vegetation studies, including the 1970s findings of Frenchman Theresien Cadet, who had produced an island-wide description of vegetation types

With a broad idea of the vegetation types the island supported, they used data on altitude, soil types, rainfall and climate and their association with vegetation types, to reconstruct the original (pre-transformation) extent of natural habitats.

This information was entered into a Geographical Information System (GIS) and enabled the researchers to map coarse-filter biodiversity surrogates and to identify areas where the habitat had been transformed over the years.

"We proposed a protocol for defining a system of habitats and for using these to provide a preliminary assessment of conservation priorities for La RÃ©union," Richardson elaborated. "The protocol draws on existing data and expert knowledge to map habitat types, assesses the extent of habitat transformation, and quantifies heterogeneity between habitat types.

"Importantly, this approach can be duplicated for conservation plans on the other two Mascarene Islands, where similar levels of information are available."

In their studies, the researchers found that the island's pattern of habitat transformation was uneven among the 19 habitat types identified.

These habitat types fall into the following categories:

"Urgent action is needed for several habitat types that are restricted to a few municipalities and/or where a large part of the original extent has been transformed."

Added to these factors is growing urbanisation. The population on the 2 512km2 island is set to reach one million by 2020. Almost 50% of the island has been transformed by crops and urban area or is now covered by secondary vegetation.

As the island is divided into and managed by 24 municipalities (these range in size from 16 to 241km2), these authorities were identified as a basis for implementing conservation priorities.

"Firstly, the municipalities are responsible for decision-making regarding land use, especially urban expansion. Secondly, municipalities in La RÃ©union are relatively homogenous in size and each has a coastal and montane section. Thirdly, their boundaries follow on major topographic features such as cirques, cliffs and waterways," Rouget explained.

One habitat, the lowland savanna, has almost gone and only a few individual trees remain. Two others, the lowland dry forest and the subalpine Sophora thicket, have less than 1% of their original distribution intact. Only two habitats remain unaffected by invasion: the Pandanus mountain wet thicket and the subalpine shrubland, high up on the mountains.

Some habitat types, such as the subalpine herbland, are largely invaded but not transformed while others, such as Philippia mountain thicket, have been transformed but fortunately not invaded. La RÃ©union is also the last of the Mascarene Islands with large areas of untransformed forest; and these thus represent regional conservation priorities.

And although the island's habitats are under threat from tourism and urban development, Richardson and Rouget are confident that La RÃ©union has the opportunity to preserve a representative sample of all habitat types. Maps from their broad-scale analysis of habitat diversity are already in use by local stakeholders in land management and conservation.

"The project has paved the way for more detailed conservation planning and hopefully the creation of formal networks of reserves and other conservation initiatives," Richardson added.

"In the old days it was thought to be sufficient to keep a certain percentage of land for reserves. It's now evident that we need to conserve representative parts of all habitats, with an emphasis on connectedness," Richardson said.

"It's been very encouraging to see that the work we have done has been so well accepted."

But the relationship goes beyond conservation planning and back to conservation research and education. Benis Egoh, a postgraduate researcher at UCT, is currently working on La RÃ©union, and funds are in place for further exchange of students between UCT and La RÃ©union to refine aspects of the initial plan. Special emphasis will be given to improving the understanding of the dynamics of alien plant invasions.