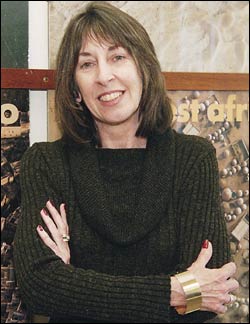 Not one, not two, but three senior UCT researchers were among the four finalists in the South African Department of Science and Technology's new annual Distinguished Woman Scientist awards. But in the end it was Vanessa Watson, a professor in the School of Architecture, Planning and Geomatics, who took the overall laurels, earning her the title of Distinguished Woman Scientist of the Year.

The awards, handed out in Johannesburg recently, honour the role and achievements of women scientists and particularly their efforts to improve the lives of other women. Guest of honour at the awards ceremony was UCT honorary graduate Hamilton Naki.

Watson was certainly in esteemed company. UCT's two other finalists were cousins and peers Professor Jennifer Thomson, an authority on genetically modified foods, and Professor Zephne van der Spuy, the first woman in South Africa to head a university obstetrics and gynaecology department. (Their grandfathers were identical twins.)

"All are senior researchers and have worked long and hard to gain respect in their respective fields."

Watson, who collected a prize of R50 000 and a medal, is a leading authority on urban planning. Although her work is not science per se, the influence of her research and work extends throughout Africa. She has linked all 15 of the sub-Saharan regions' English-speaking universities that teach planning by creating the Association of African Planning Schools.
This is linked to the Global Network of Planning Schools (GPEAN), a body representing nine associations around the world, whose aim is to improve planning education. She is also currently in talks with the World Bank on the possibility of creating a pan-African two-year master's programme in urban renewal. This will be hosted at UCT.

Trained as a molecular biologist, Thomson is described as a scientist with "an impeccable international pedigree". The biotechnologist and author of Genes for Africa: Genetically Modified Crops in the Developing World is best known for her "cautious" advocacy of genetically modified foods and other organisms.

Pleading the case for GM technology, Thomson says the risks of GM foods have to be weighed up against the benefits, especially in developing regions such as Africa. A cereal shortfall of 90 million tons is expected by 2025 if the continent's current agricultural practices are continued. Her focus is very much on the alleviation of poverty and starvation and improving the quality of life for African women, who play a critical role in subsistence agriculture and crop production.

Van der Spuy, who is president of the College of Obstetrics and Gynaecology of South Africa, is a reproductive endocrinologist with a special interest in how hormones affect people. Frustrated in earlier years by the glass ceiling, she said she struggled to get a registrar's post. The first woman to head a university gynaecology and obstetrics department, that assay is well behind her.

Today she is renowned for her much-publicised clinical trials testing a male contraceptive. Her work covers a spectrum of "outstanding" laboratory and clinical research for the improvement of women's health. Van der Spuy is also involved in a large international project examining infertility and safer abortions.

Commenting on the awards, which included three L'Oreal R100 000 grants for promising PhD researchers, Van der Spuy said the latter were especially welcome. "Grants can make or break a researcher's career," she said. "I thought their inclusion was an imaginative and wonderful response from the DST."

Although initially surprised by her achievement, Watson has accepted the news with equanimity, glad to have pressing urban issues brought into the spotlight. Her main research focus on cities is directed at marginalized people: women, children and the poor.

"Historically, planners have tried to separate residential and working areas but what we need are safe, integrated, accessible and public-transport based cities."

Watson has worked closely with Cape Town metropolitan planners on a way forward for the city, which after 10 years is as segregated and divided as ever, she says. However, she cautions against quick fixes, ad hoc short term solutions to the city's growing problems.

"We need committed and sustained efforts to achieve properly integrated urban areas. It will take 10 to 20 years to get this city right."

How the city will cope with HIV/AIDS is of particular concern to her. Watson is keen on the concept of cluster or community housing embedded in the communities, where several healthy adults would oversee groups of children orpha-ned by AIDS. But these structures should not be institutionalised precincts, she added.

"Ideally, these cluster communities should be linked to specific health and social facilities and not separated or institutionalised in any way, but part of the whole community." To provide some impetus in this area, Watson already has a master's student working on the concept.

While the news of her award is sinks in, Watson's twin 14-year old sons are less in awe of her "distinguished woman scientist" title, which conjures up images of petrie dishes and microscopes rather than concept plans and models.

"They complain that I still can't help them with their science homework," she quipped.