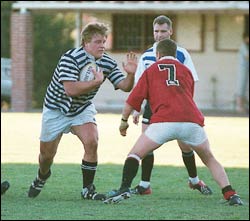 It's hardly been the best year for the FNB UCT rugby squad, flustering a top side one week, fizzling against a minnow the next.
Although their opponents on September 13, Northerns Tygerberg College (NTC), can hardly be described as also-rans (NTC is currently placed second on the Super League A log), Ikeys will again rue wasted opportunities and innumerable handling errors as they went down 28-29 on the day. This after taking an early 15-0 lead playing into a strong wind.

UCT's initial 15-point lead was reduced to only five at half-time (20-15), but with the prospect of playing with the wind at their backs, the side would have been confident that they could wrap things up quite comfortably in the second half.

A spate of second-half blunders cost the side though, and allowed NTC to squeeze out a 29-23 lead with about 10 minutes to go. UCT scored a late try, but Anthony Knox's conversion - which would have given UCT a one-point lead and possibly the win - struck the upright.

Wing Pieter Keevy scored two of UCT's four tries, the other two coming from Body Sieber and Adrian Hewlett. Knox converted one of the tries and booted over two penalties.