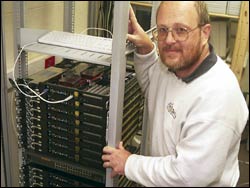 Climate cluster: Assoc Prof Bruce Hewitson admires the new addition to the Linux cluster at the Climate Systems Analysis Group. "This system can compute in less than ten days what it took six weeks to do with the previous system."

Weather forecasters at UCT's Climate Systems Analysis Group (CSAG, or see-sag) have the wind in their sails. The reason is the delivery of 32 new AMD Opteron 64-bit processors that have boosted the group's strategically important climate modelling projects.

Climate research is one of the most demanding computational tasks in the world, requiring enormous computational facilities to integrate and analyse the vast arrays of data for global and regional climate modelling. It is these machines that produce the short-term weather forecasts that dictate whether or not we pack our brollies, as well as the seasonal forecasts and climate change projections that inform national policy on broader issues.
The UCT climatology laboratory is also the lead organisation in a climate-modelling consortium also comprising Pretoria University and the South African Weather Service. It is also host of the new Global Forecasting Centre for Southern Africa (www.gfcsa.net).

The system is based on 64-bit AMD Opterons, which represent a notable advance in affordable computing technology, and which will operate as a single computing cluster. The system cost just under R500 000, provided as part of the Innovation Fund grant on seasonal forecasting.

What attracted many Linux enthusiasts to the recent launch in the Environmental and Geographical Science Building is that it is also the first installation of these CPU's in the country, and of this size at UCT.

"Preliminary benchmarks suggest it will give us about a theoretical eight-fold increase in computing power at 25% of the cost of the last installation," Associate Professor Bruce Hewitson told Monday Paper.

"We've doubled our computational capacity every two to three years, culminating in this system. This is the fourth generation cluster in CSAG and the biggest and fastest on campus.

"We've adopted a slightly different approach to this set-up," Hewitson explained, "opting for a diskless environment, and using the cluster as a single computer through appropriate programing."

And though the UCT laboratory now offers the largest and fastest system for climate research on the sub-continent, it is an achievement Hewitson weighs against the fact that the continent's capacity in this area is paltry.

"We are dismally behind," he said.

The picture is particularly stark when one considers that Africa does not have even one supercomputer dedicated to climatology research (the continent has a measly 0.6% of the world's super-computer facilities). By contrast, the Los Alamos National Laboratory in the United States recently installed a 3 300 CPU cluster, while other centres have multiple supercomputers in one institution.

While the new machines nestled on the metal racks of the CSAG laboratory compute away, the frustration for climatologists is that the equipment boost will not fill several "huge gaps" in their understanding of local climate.

"There is much about local climate system that we do not know therefore we can only simulate questions on the computer. For example, how do land surfaces affect the variability of the seasons? What will climate change bring about in 50 years for the different regions in South Africa?"

The relevance of understanding the climate system is readily apparent if one considered the enormous impact weather has on society, he added. "As an example of one short-term event, the current hurricane Isabelle is having a major impact on the east coast of the USA, causing significant damage with large economic losses. And just in the last week south east Asia suffered extreme damage with numerous deaths from a similar event."

The launch of the supercomputer was attended by many curious and keen cluster computing and Linux enthusiasts (Did you know there is a UCT-Linux club on campus? See notes below.)

"The AMD Operton is not readily available in South Africa and we invited those involved with cluster computing to come and see the system. It was a good opportunity to stimulate discussion about cluster computing on campus," the climatologist added.

One area where climate is very carefully controlled is in the CSAG laboratory. To handle the complexity of the applications, the group has developed a team of postgraduate and postdoctoral students over the past six years or so, people who are "model literate".

"Running the complex system requires theoretical knowledge and experiential knowledge," Hewtison expanded. "But in terms of problems, it's a case of first knowing what the pitfalls are and then how to fix them."

(There are various cluster groups on campus that participate in the UCT Linux Enthusiasts Group (LEG) (www.leg.uct.ac.za), which is the university's branch of the Western Cape Linux Users' Group (www.clug.org.za).)