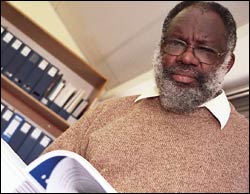 Spoiling for oil: UCT's Prof Ogunlade Davidson recently presented the inaugural lecture in the new Distinguished Energy Issues in Africa Lecture Series of the Centre for Energy Research and Development (CERD) in Nigeria.

The ticklish state of oil and gas production in Africa came under the spotlight when UCT's Professor Ogunlade Davidson delivered the first in a new series of lectures on energy and development at Obafemi Awolowo University in Nigeria in late August.

The Distinguished Energy Issues in Africa Lecture Series was recently established by the Nigerian university's Centre for Energy Research and Development (CERD), which hopes to draw more attention - and research interest - to energy and development issues on the continent. Davidson, who heads UCT's Energy and Development Research Centre (EDRC), was invited to present the series' inaugural lecture by CERD, headed by Professor Anthony Adelugbube.

For his talk on Oil and Gas in West Africa: Long-term energy security concerns, Davidson zeroed in on three areas of concern around West Africa's precious hoard of oil and gas, namely production, exporting and internal capacity. Firstly, he pointed to the vast amounts of associated gases that go to waste in oil production in the region, leading to some serious ecological concerns and to the loss of potential income.

"In sub-Saharan Africa, about 70% of the associated gases are blown off into the air, compared to about 7% in the rest of the world," he explained. "With the associated gases wasted in Angola alone, you can produce up to half the power that Eskom produces, so there's huge potential."

Another political hot potato is the demand for West Africa's oil resources. Seven out of the eight major oil finds in the world last year were on the West African coast, observed Davidson.

"The point is that Africa now has roughly about 7% of the oil reserves in the world - West Africa produces a significant proportion of oil, but exports two-thirds of it."

The bulk of these exports are headed for the United States (at about 620 barrels per day, Nigeria is the fifth largest supplier of oil to the US). And the US, in the face of political instability in the Middle East, is keen to identify new suppliers and is shifting some of its focus to Africa, added Davidson.

"Also, past events have shown that most of the proceeds from exports have been badly mismanaged due to mostly internal factors that have left these nations poorer than they were before the inflows. Unless these nations put into place internal structures in terms of adequate human resources, institutional structure and organisation, along with suitable policies, it will be a tale of missed opportunities.

"The question is, what effect will it have for the long-term policy concerns for the continent in terms of security if most of the oil goes to the United States? It seems to mean that our own development is simply for the export of oil, with no control by the countries concerned."