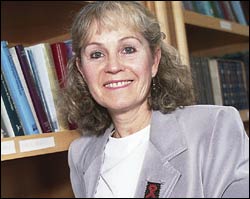 "There is no culture without literature, whether it is oral or written. Literature is a main component of any culture and any language", says Dr Azila Reisenberger, senior lecturer in the Hebrew and Jewish studies department.

However, people that belong to one culture yet live in countries where another language is the dominant one, have a major dilemma: do they keep writing in their own language with the rich cultural references they posses or abandon it for the benefit of being published?

This is true of South Africa where many black authors forsake their vernacular languages to write in other languages, languages that are supported by larger markets and publishing industries.

Part of Reisenberger's research deals with minority literature written by authors who live and write their literature in the dominant language of the country.

Currently she is engaged with an initiative to promote these "minority writers" and is looking for South African authors who have published their works in English, even though this is not their mother tongue.

"In South Africa there are many such writers, people who cannot write in their own language as there is no viable readership to purchase their works" The circle, she said, also included many writers belonging to other nationalities.

Reisenberger is a case in point. Though the academic and poet has lived in South Africa for 25 years, she still writes much of her poetry in Hebrew for sale in Israel where she has a following.

"As a Hebrew writer I try to tap into the English culture (often this exercise is unsuccessful, though Joseph Conrad did this very well) but invariable the layers of my own culture are lost. Culture is not easily translated."

She said many South African black writers experienced similar problems when trying to express their ideas in English.

"Therefore I believe that we need to meet and discuss issues that concern all of us. We have a multilingual country, but where are the original Xhosa, Zulu and other vernacular works that should be filling our libraries? What will the children read?" she asked.

She also wants to identify minority writers with a view to publishing their literary work in an anthology. And as part of an initiative to spotlight them, Reisenberger is planning a conference in August 2005, and is keen to set the ball rolling by asking people with an interest in this area to contact her on tel 650-2948 or e-mail azila@humanities.uct.ac.za