Ailing metropolis: Mother of a problem 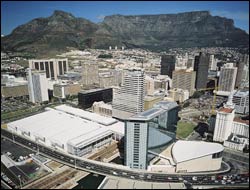 Political seesawing and a lack of real planning are stripping Cape Town's basic assets and producing what UCT's Professor Dave Dewar warns is an "untenable situation" for the Mother City. "The city is in deep trouble and the problem is politics," he asserts. He spoke to Helen Theron.

A new mindset was urgently needed to avoid the knee-jerk management by city decision-makers, he said.

A veteran in international city planning circles, Dewar was responding to a recent Cape Argus report: Cape Town in the dark - and in the poo, one that highlighted budget cuts of R180-m from the trading services sector, which will affect the delivery of electricity, potable water and treated sewerage.

Dewar, who is deputy dean of the faculty of engineering and the built environment, said the problem was broader than the city's lamented budgetary shrink or its cumbrous debt burden of R2.5-billion, and required a long-term view, an ingredient missing from the planning of the past decade.

The academic and practitioner said the city's seesawing political fortunes had thwarted efforts to maintain basic assets such as substations and water and waste treatment plants, without which the culture of the city looked bleak.

The succession of bureaucrats and politicians had lost sight of these basics in favour of "sexy projects", he added, vote catching, but narrowly focused programmes that swallowed vital rands but did little to secure essential facilities and services.

"The city is in deep trouble and the problem is politics," he affirmed. "It was only at the time of transition that a party political system was introduced into city government. Effectively, what we've had is a succession of governments, each seeking to make political statements through the way they spend public money.

"Frankly, what they've been doing for years now is asset stripping. They haven't been investing sufficiently in basic infrastructure maintenance."

The political problem had been exacerbated by a cycle of shifting political party alliances.

"Every political change has been followed by a bureaucratic change at the top. New people come in and each one tries to outdo the other. The system of appointing bureaucrats around party political lines is an absolute disaster in my view. It's an untenable situation. Real planning has not been occurring at all."

In spite of the political horse-trading, Dewar is quick to laud the "very good civil servants" among the rank and file, who, he maintained, are doing the best they can.

"But morale is very low," he cautioned.

He has some pragmatic advice on setting the city to rights.

"We have to get stability into the system and we've got to start to make hard choices. The budget has to be informed by the needs of the city as opposed to vote catching. The real issue is to ask which projects are critical to the city's future and to begin with those."

The first step in retrieving order was to plan the shape of the budget.

"There are huge demands on every South African city's budget, for example: maintenance, basic needs investment, urban renewal, and productive investment. Any one of these demands could swallow the whole budget, but all are essential."

But the basic needs projects, the things relating to power, sewerage and potable water, had to take priority. And these facilities had to be maintained, he urged.

"What we need is a holding budget; one that says, let's first catch up with the past, let's first protect our assets and then we can slowly move out from that position."

Second, it was also vital to apportion money to growing the city's assets to procure further development and renewal, to correct past imbalances.

"Spatially, these investments have got to be concentrated; we have to accept that we can't solve every household's problems. We're looking for projects like the People's Public Places Programme, which created dignified public places in low income areas; places where everyone is the same and dignity is afforded to all."

Sadly, this project has been put on hold.

"In many ways we're losing the battle," Dewar reflected. "Take the debate about finishing the freeway; you see how silly it would be to spend R350-m to benefit an insignificant number of people when you have so many other demands."

And while there is pressure on maintaining present facilities, there is an even greater burden on city managers to service new developments as the city swells to accommodate more and more people. But as far as urban influx is concerned, figures are difficult to fix, noted Dewar.

"We estimate the rate for Cape Town is around 5%, but nobody really knows. With collapsing conditions in the Eastern Cape, it seems that there was a recent surge in the city's population, but the longer-term view indicates that natural increase rates are down and that migration is slowing significantly."

Nonetheless, in a beleaguered, growing metropolis, city authorities needed to think beyond the square.

"We have to think totally differently about our cities. For example, with water all the emphasis is on increasing supply. But 95% of the water that comes into Cape Town runs out to the sea without ever being recycled. It's absolutely insane," he added pointedly. "The city needs a whole different mindset."

Developmentally, Cape Town is also lagging behind Johannesburg and Durban.

"Joburg hit the bottom some time ago. They realised they had to change and they're doing some interesting things at the moment. There has been considerable emphasis on inner city development and they have some interesting housing projects in that area. They have also adopted a public places programme and they are taking the idea of urban renewal very seriously."

The pressure on primary services is not good news either for the Mother City's ability to market itself as a world-class destination for major world events.

Although Dewar believes the city lacks the capacity to stage significant world events such as the Olympics (too big), there are others Cape Town could host.

"The city can't afford not to think of productive investment, like hosting the 2010 World Cup Soccer tournament. We have to consider revenue generation very seriously and we must continue to invest in improving the city's competitive assets."

The city's problems were also collective, he noted. To this end, the EBE faculty had started an initiative that consciously sought connections with the city managers. "We've had a number of meetings with senior city officials. Collectively, there's a lot of expertise around. It's about tapping into the right expertise."