Gold medal places researcher firmly back under the spotlight 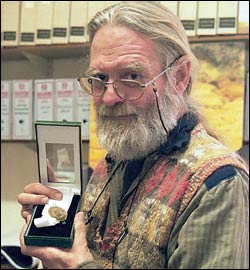 Highest honour: Prof Bryan Davies received a gold medal at the recent meeting of the Zoological Society and the South African Society of Aquatic Scientists. He is the second member of the department to have received this; some years ago Dr Arthur Harrison scooped the award.

If Bryan Davies had been planning to ride off into the proverbial sunset after early retirement, he didn't make it very far.

A prestigious Gold Medal from the South African Society of Aquatic Sciences has put the zoology professor firmly back under the academic spotlight in an institution where he has been a pivotal part of the respected Freshwater Research Unit (FRU) and its probing, incisive, and at times contentious research into the future of the subcontinent's freshwater resources.

To meet his research and part-time teaching commitments, Davies travels between Cape Town and Pringle Bay where he and his wife, Dr Kate Jagoe-Davies, have a cottage (currently under the builder's trowel).

He is clearly delighted with the aquatic sciences accolade and jokes about keeping it close by, "until the novelty wear off". With the award coming in the zoology department's centenary year, Davies still feels he is "walking on air". These gold medals are rarely given; in fact it is the highest honour anyone working in the field of aquatic ecology in freshwater systems can receive, recognising research, scholarship, teaching and leadership in the field.

Davies' name has been synonymous with the FRU, which he founded in 1986 with Dr Jackie King and Professor Jenny Day. Under its banner the trio conducted the first research in the world on the impacts of large dams on rivers and the problems encountered in transferring water between catchment areas.

His more recent triumph was the publication of Global Perspectives on River Conservation, of which he was an editor. It was the first publication to integrate vast bodies of information and statistics on the world's major rivers and tributaries.

He has also been a particularly vocal champion of water conservation. The dry winter notwithstanding, he believes Cape Town is headed for a "serious disaster", which can only be exacerbated by "narrow-minded water managers".

"Water is not an unlimited resource," he challenged. Citing compelling statistics such as the fact that the average Constantia home uses three tons of water daily compared with the 78kg of the average township home, he believes a broader vision of water management is needed if the city is to match its dynamic of rapid growth.

Further afield, there are other prescient dangers. There is alarming talk at the Southern African Development Community (SADC) of piping water from the Congo River to Gauteng. If given the green light, this will see the introduction of foreign species, toxins and so on being introduced to local water supplies.

The future looks too busy to really contemplate heading off into the sunset. There is a book planned with the provisional title of The Living Rivers of Africa, which will be a natural history of the continent's major waterways, legendary rivers such as the Congo, the Nile, the Orange and the Zambezi.

But that is another journey.