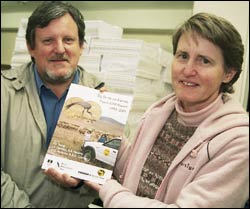 While there were celebrations under way at the Avian Demography Unit (part of Statistical Sciences) to mark the 50 000th hit on the unit's popular website, another celebration was going on alongside; the arrival of piles of Big Birds on Farms: Mazda CAR (Co-ordinated Avifaunal Roadcounts) report 1993-2001 and the 10th anniversary of monitoring large terrestrial birds on farmlands.

The publication summarises the information gathered over eight years of observing big birds on farms - mainly cranes, bustards and storks - and provides a useful indicator of how these large terrestrial birds are doing. With this information, avian conservationists and statisticians will be able to devise conservation strategies and recommendations for landowners.
The project was initiated 10 years ago by David Allan, formerly of the ADU, with 15 routes in the Overberg. It has since become a national initiative, growing to include over 330 fixed routes covering 18 000 km, most of this in agricultural areas, in six provinces (Western Cape, Eastern Cape, Northern Cape, Free State, Mpumalanga and KwaZulu-Natal).
Twice a year (mid-winter and mid-summer), hundreds of volunteers and conservationists count these big birds along fixed routes. Fourteen of the 21 species counted appear in the Red Data Book for birds.

The report provides a valuable record of trends in numbers and the use of habitat. Significantly, the CAR report shows that landowners are making a positive contribution in the struggle to protect these birds.

"It has been very encouraging to see the Blue Crane (our national bird and a threatened species) increase in the Overberg from a summer density of 47 birds per 100 km to 137 birds per 100 km during the past 10 years," Young commented.

About half of the routes are covered by farmers, and the report has been dedicated to farmers and farm workers because they carry the responsibility for conserving biodiversity on the land.

The ADU's James Harrison said farmers carried a huge responsibility in conserving these birds, as these species that have huge ranges are not adequately conserved within protected areas. The report therefore includes 10 points to guide farmers in their conservation actions: The report was edited by James and colleagues Donella Young (co-ordinator of the project) and RenÃ© Navarro, who provided invaluable IT support, as well as two conservation ornithologists, Mark Anderson of Department of Agriculture, Land Reform, Environment and Conservation (DALREC) and Brian Colahan of the Free State Department of Tourism, Environment and Economic Affairs (FSDTEEA).

It was a team effort in every way, Young added, involving farmers, bird club members, conservationists and some schools in collecting the information. One couple, Des and Mary Frylinck of Cape Bird Club, participated in all 20 counts during the past decade. Participants represent 64 non-governmental and governmental organisations, with bird clubs, DALREC, FSDTEEA and the South African Crane Working Group playing significant roles. Specialists wrote the species texts and Precinct Organisers wrote the precinct (regional) accounts. The Tony and Lisette Lewis Foundation, BirdLife South Africa and the Mazda Wildlife Fund provided financial assistance.

The project is a good example of what UCT's Professor George Ellis dubbed "people science", involving more than 750 people in each count. Recently, Young counted birds with Jeffrey Arizon, principal of Teslaarsdal Primary School and five enthusiastic Grade 7 pupils. "They have amazingly sharp eyes," she noted.

This is the largest scientific project of its kind in South Africa, involving more people on a single day than any other birding activity, Harrison added.