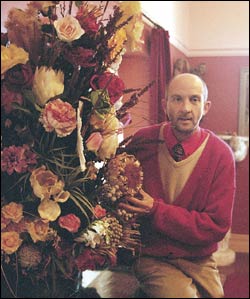 There are floral motifs everywhere in Christopher Peter's home; on upholstery, lampshades, paintings and rugs. There are also two large floral sculptures in the snug sitting room in the annex of the renowned UCT Irma Stern Museum, each arranged with Peter's instinctive flair and innate understanding of colour, texture and form.

The curator of the Museum is something of a name in the circles where blooms and buds, leaves and lushness are tools of the trade. Besides regularly gracing the pages of interior decorating magazines - and a recent appearance on Top Billing - his sensuous and exuberant signature has seen his work at many exhibitions, dinner parties and social gatherings.

His flowers welcomed Queen Elizabeth II to the British High Commissioner's home in Bishop's Court in 1995, as well as the Prince of Wales when he dined at a private home in Cape Town several years ago.

Flowers, he believes, are a natural extension of his job at the house museum. "Irma Stern loved to paint flowers and the floral arrangements I do for the museum reflect this love."

But it's not just Irma Stern's works visitors come to see, it is the entire house with its distinctive furniture and collection of Africana.

His affinity for flowers and foliage grew during his childhood on a farm near Stutterheim in the Eastern Cape.

"In those days people didn't have much art on the walls, so flowers became the main decorative items in otherwise austere interiors."

Working first at the King William's Town Museum and then at the Stellenbosch Museum, he began doing flowers for exhibitions.

Flowers are an integral part of his life. Throughout the history of art, flowers have played an important role in paintings, sculptures and decorative crafts. The lily, the rose and lotus, as examples, all carry rich symbolism of love, purity and compassion that help decode the meanings of artwork.

These days there are few do's and don'ts in flower arranging.

"Amateur floral artists have been liberated by the likes of Constance Spry in the 1950s. She broke all the rules," Peter said with glee, presenting a well-thumbed book on her work.

Neither are everlasting or fake flowers the decorating no-no they used to be.

One of his best buys was a bunch of artificial zinnias from Turkey. But, there are occasions where fake flower would be malapropos - at weddings, for example.

While Peter's work eschews the ordinary, he does work with some basic rules. Like sculpture, the form of the arrangement should be eye-catching, he advised.

"From a good, basic structure you can be quite creative."

"Don't do the flowers in the kitchen if they are to grace a dinner table. The light and context will be completely different there."

He is also a great advocate of cutting from the garden. To him, a well-stocked garden is like a large palette of unusual colours and textures to a painter.

"Use whatever you have, including attractive leaves and boughs," he urged.

Fortunately, the garden at the Irma Stern is a rich source of material, from poinsettias to sword ferns. Here, Peter pays tribute to UCT microbiologist Dr Barbara von Wechmar who created and tended the museum's herb and flower garden in the 1980s. These days the garden is tended by the green fingers of UCT's senior horticulturist, Noelene le Cordier.