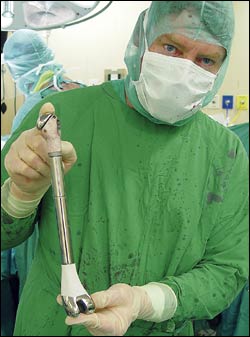 A partnership between UCT's Dr George Vicatos and surgeon Dr Keith Hosking has given hope to a young man with a bone-wasting disease, Nicole Chidrawi reports.

The X-ray showed a vast area of dark nothingness where the bone of the young man's left, upper arm should have been.

A rare bone disappearing disease had savagely rendered the young man's limb ineffectual and confined it to a sling for the past 18 months.

They achieved this through the design and production of a titanium, Hydroxy-Appatite (H/A) coated prosthesis, including a fully functioning elbow and shoulder joint.

The prosthesis also includes a stem (protruding from the elbow), which links the elbow to the bones in the lower arm. Thankfully, these bones were not affected by the disease.

During a four-hour operation at Groote Schuur Hospital on August 7, Hosking removed what remained of the patient's elbow and shoulder joints and inserted the prosthesis, designed by Vicatos, which will allow the youngster to regain full use of his arm. According to the doctors, the inimitable characteristics of this case were not only the rarity of the disease but also their collaboration with United Kingdom orthopaedic prostheses manufacturer BIOMET, the development of a fully functioning elbow joint and the unique H/A coating (completed by BIOMET).

The H/A coating, a coral-like substance, will allow the body to recognise its own material and encourage bone growth onto the prosthesis, thereby creating a more functional arm. Hosking said: "BIOMET is one of the biggest suppliers of orthopaedic prostheses in the world. Our designs have now been recognised by a major international company and that's a coup for us.

"The company has been of great assistance in making this project possible. Jodi Myers of Macromed SA (regional representative of BIOMET) assisted with transporting the prosthesis to and from South Africa," he added.

With only about 200 cases ever reported in medical history, Gorham's Disease (also known as Bone Disappearing Disease) is characterised by bone loss often associated with swelling or abnormal vessel growth.

Normally, bones replenish themselves through a cycle of bone dissolution and re-growth. But in people with the disease, bone loss occurs and progresses in certain areas of the body but no new growth takes place. This may occur in just one bone or may spread to adjacent areas of the affected bone.

Hosking added that it's a disease that commonly affects long bones in the bodies of young adults, usually in their 20s and 30s.

"In this particular case, although benign, the disease was particularly aggressive and involved the entire humerus or upper arm," he said. "With poor results from bone grafting - the disease simply jumps into the new bone - the prosthesis offered a viable alternative."

Vicatos' task was to design and produce the custom-made prosthesis. This process began about a year ago while he was in Europe. He made sketches from initial X-rays sent from Hosking, whereafter a computer aided design package allowed Vicatos to ascertain the exact dimensions.

The outcome was a modular design, which would assist Hosking, using simple tools such as a spanner (sterilised of course), to assemble the correct length of the prosthesis inside the operating theatre, outside the patient. "They are designed to be simple and make the surgeon's job easier," Vicatos added.

The manufacturing process was delayed due to Vicatos' stock of medical grade titanium being depleted. But once a new shipment arrived from the UK it took Len Watkins, Principal Technical Officer in the mechanical engineering department, only three weeks to machine the components.

The machines used by the team produced the pieces with sharp edges. It therefore took a further two days to smooth these by hand.

The elbow, shoulder and stem components were then sent to BIOMET for the coating process and arrived back in South Africa, fully sterilised and packaged, one day before the operation was scheduled to take place.

In total, the prosthesis cost R40 000. Had the custom-made implants been imported from overseas, the cost would have soared to a staggering R250 000.

"Because they are locally designed and manufactured, these components are far more affordable than the imported overseas equivalents, which makes them more accessible to South African patients," said Vicatos.

In addition to their latest success story, Hosking, Vicatos and Watkins have already collaborated on 27 implants of this nature.

Their range of prostheses include a distal radius, a proximal tibia, a proximal femur, a proximal humerus, as well as a complete modular system for the replacement of part of or even the complete femur.

Their designs are repeatedly revised, Vicatos explained. "Some parts are exceptionally difficult to manufacture and others can be standardised and produced in various sizes and options in advance so patients need not wait. With our new machinery, however, we are expecting to manufacture some of the components in half a day and with greater precision," he said.

Research and development in this exciting project is ongoing and UCT have allocated space on upper campus for Vicatos and his team, which includes one MSc and two undergraduate students, to set up a research and manufacturing unit.

ISIQU, the Xhosa word for "complete body" is the name they have chosen for their unit, which falls under the umbrella of the Faculty of Engineering.

World-class tumour implants have now become a possibility due to the expertise at UCT and the dedication of the ISIQU team, but additional funding is urgently needed to facilitate research, development and the purchase of the expensive equipment needed to continue providing this valuable service.

At the time of going to press the young patient was making a good recovery and was expected to be released from hospital later this week.