Cardiac specialist caps it all at Oxford 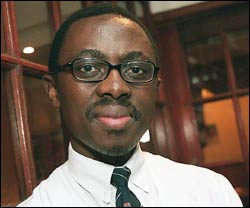 Two years after wrapping up a flawless doctoral thesis, UCT cardiac specialist Dr Bongani Mayosi returned - family at this side - to the United Kingdom in July to graduate from Oxford University.

Mayosi, currently based in the Department of Medicine's Cardiac Clinic in Groote Schuur Hospital, first headed for Oxford in 1998 on a Nuffield Oxford Medical Fellowship. Working from Oxford's graduate Wolfson College, the John Radcliffe Hospital and the Wellcome Trust Centre for Human Genetics (WTCHG), he would for the next three and a half years immerse himself in the study of the genetic underpinnings of heart muscle disease (cardiomyopathy) and cardiovascular risk factors.

Taking a genetic route to understanding cardiomyopathy offers many payoffs, according to Mayosi. "The genetic approach has been quite powerful in teasing out some of the origins of disease," he said.

"Whereas a hundred years ago people were trying to understand the causes of infectious diseases and discovered the germ theory, we're now also faced with many non-infectious - or non-communicable diseases - and in many cases we're not sure what the causes are. But it would appear that the causes of many of these non-communicable diseases - such as heart failure, high blood pressure and diabetes - is an interaction between the environment and the genetic make-up of the host."

And while just about everybody is exposed to more or less similar environments (smoking, high-fat diets, lack of exercise), not everybody develops heart disease. The question for scientists is, of course, why not?

"It's likely that there's a trigger in the environment, and that those of us who are genetically predisposed to it, develop heart disease," noted Mayosi.

In 2001, he and some associates published a pioneering paper, A common mitochondrial DNA variant associated with susceptibility to dilated cardiomyopathy in two different populations, in the British medical journal Lancet. In this study, they compared the genes of patients with idiopathic dilated cardiomyopathy (a disease where the enlarged heart does not pump properly) to those of healthy subjects, searching for telltale signs of this "mitochondrial DNA variant ( a minor mutation of the mitochondrial DNA gene, the mitochondrion being the 'power station' of the cell)."

They would run the tests in both the South Africa and the UK.

The scientists found that, among South Africans, 45% of the patients with idiopathic dilated cardiomyopathy had these abnormalities, while only 16% of the "normal" population had them. Results from the British tests revealed similar trends - 17% of the sick subjects carried the abnormality, compared to only 8% of the healthy subjects.

"We identified a genetic risk factor which increases the risk of heart failure two-to four-fold in people who carry the genetic factor," said Mayosi.

His thesis would, in 2001, get an unqualified green light from the examining panel at Oxford, who would demand no alterations to the paper. Mayosi returned to UCT later that same year.

Last month, Mayosi and his family - wife, Nonhlanhla (a dermatologist), and two daughters, Vuyi (11) and Gugu (9), as well as niece Nosipho (18) - returned to Oxford for his graduation ceremony. "I wanted my daughters to grow up first so that they could remember the experience; they were very small when we first went over," he said of the deliberate delay in graduating.

And a memorable moment it was for the former herdsboy who, along with his siblings (who grew up to be engineers and economists and lawyers and such) and other children of rural Ngqamakhwe in the former Transkei, was taught by his mother for four years in a makeshift school in a church hall.

"It's a small thing in the bigger scheme of things," Mayosi said modestly of his Oxford degree. "But for me and the people from my village, it's a big deal."