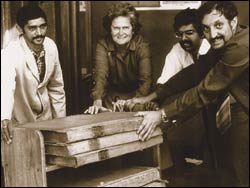 Salvaging bound copies of the Cape Times in 1981 were (from left) Chris Davids, Pam Stevens, Mohamed Adhikari and Colin Webb.

Founded in 1903, in the wake of the South African War, the Department of Historical Studies at UCT reaches its centenary this year, making it the oldest university history department in sub-Saharan Africa, writes Associate Professor Howard Phillips.

What has been taught

The first seven of the department's 11 heads since 1903, filled the now frozen King George V Chair of History, which played a leading role in South Africa in establishing history as an autonomous university discipline and not just as an adjunct to literature, which is how it had been seen in the English-speaking world until the 1870s.

Even more formative was its contribution to making South African history an academically respectable subject in its own right. Thus, while the first King George V Professor, John Edgar, felt that "The history of South Africa taken by itself is not perhaps a very educative study", his successor, the more imaginative Eric Walker, allocated half of the History I course to it.

In a more general sense too, the department's concept of what constitutes academic history has widened appreciably since it was founded, reflecting a similar international trend. Until the 1960s, political and constitutional history dominated its teaching, with economic history and the history of high culture taught in separate departments. Apart from the course in South African history, the history of Europe at home and abroad loomed largest in the syllabus.

Very tentatively - and not without opposition from staff with a more traditional outlook on academic history - these foci began to expand from the 1960s. This also signalled an awareness of the importance of understanding the history of Africa and Africans, against the background of the gathering winds of change in the continent in general and of Sharpeville in particular.

Consequently, in 1964, Walker's successor-but-two, Eric Axelson, an expert on the Portuguese in Africa, introduced the first university course in South Africa on African history, an innovation creatively extended in the 1970s and 1980s by Robin Hallett's dynamic teaching. Courses on urban history, slavery, social history, oral history and the history of modern revolutions were developed, revealing new ways of seeing the past; South African history was re-conceived to give due weight to the experience of the underclasses whose history was ignored by most school textbooks of the time; and even the department's venerable History of Western Civilisation first-year course began to undergo a gradual change. In 1982 its traditional, exclusively Eurocentric focus of the previous 60 years was widened to Europe in World History, and a decade later to The Making of the Modern World, an innovative course on the making of the Atlantic World of Europe, the Americas and West Africa.

From the mid-1980s, a combination of the growing influence of a new generation of staff in the department, a more flexible academic framework at UCT, the influence of changing intellectual trends in Europe and North America and the ongoing revolt against apartheid, accelerated these changes. Courses in the history of work, cultural history, women's history, contemporary history, public history, film and history, medical history and environmental history offered yet wider visions of what constituted history, while the incorporation of the Departments of Economic History in 1992 and of History of Art in 2000 added these disciplinary dimensions to the department's range of teaching. To recognise this, in 2000 the Department of History was re-named the Department of Historical Studies, a sign of one of the department's hallmarks in recent decades, adaptability and a willingness - some felt an over-willingness - to innovate.

The nearly 50 historians who have taught these courses since 1903 have reflected the dominant racial and gender patterns of the wider South African academy in the 20th Century. Almost 75% were men (until the mid-1980s exclusively white) while women usually filled middle and more junior positions. No woman has yet reached the rank of full professor in the department, though in 1962 the King George V Chair was offered to the long-serving Jean van der Poel, but she turned it down.

Who has been taught

Until the 1980s, the bulk of the more than 4 000 students who majored in history went on to become high-school teachers of history, underlining the significant multiplier effect of what was taught at UCT well beyond the department. With the faltering of history as a school subject since the 1990s, the career paths pursued by the reduced number of history graduates have expanded to include film-making, the heritage and tourist industries and broadcasting.

Taking history beyond the lecture room

Since the 1960s the department has striven hard to extend the public understanding of the past, in keeping with the fresh notions of history crystallising within its more formal syllabi. Historians like Leonard Thompson, Rodney Davenport, Eric Axelson and Robin Hallett used the medium of extramural lectures and UCT's Summer School to very good effect to do so, while a series of workshops on the history of Cape Town between 1978 and 1991 (as urban revolt against apartheid swept through the country) exposed audiences to novel ways of seeing the history of the city. Complemented by historical walks around the vanishing District Six, Cape Town's original waterfront, Observatory, Woodstock and Maitland, these popular workshops opened the eyes of many Capetonians to the rich and diverse history on their very doorstep.

In some cases, such work has interacted very fruitfully with teaching in the department, providing rich cross-pollination between teaching and research. Eric Walker's pioneering one-volume History of South Africa (1928) bore all the marks of having been trialled in his undergraduate lectures, while Leonard Thompson's The Unification of South Africa (1960) acknowledged the benefit he drew from teaching an honours course on this topic while writing this book. Similarly, Vivian Bickford-Smith, Elizabeth van Heyningen and Nigel Worden's two-volume Cape Town - The Making of a City (1998) and Cape Town in the Twentieth Century (1999), drew extensively on insights from the department's courses on urban and South African history.

Other books first took form as theses for a degree in the department - Rodney Davenport's The Afrikaner Bond (1966), Steve Saker's The South African Flag Controversy (1980), Brigitte Lau's Namibia in Jonker Afrikaner's Time (1987), Mohamed Adhikari's Let us live for our children: The Teachers' League of South Africa (1993), Milton Shain's The Roots of Anti-Semitism in South Africa (1994), Jane Carruthers' The Kruger National Park: A Social & Political History (1995) and Anne Mager's Gender and the Making of a South African Bantustan (1999).

A third category of books has been the product of international conferences held under the auspices of the department - Nigel Worden's Breaking the Chains: Slavery and its Legacy in the Cape Colony (1994) and Howard Phillips' The Spanish Influenza Pandemic of 1918-19 (2003) exemplify publications which emerged in this way, and in due course they will be joined by Richard Mendelsohn and Vivian Bickford-Smith's Film and History in Africa, a volume based on a conference held at UCT in 2002.

This conference marked a highpoint in the department's burgeoning involvement in the field of film and history, in which it was the pioneer among South Africa's universities. Already in 1992, courses were being mounted in this area, and senior students were making historical documentaries as part of their degree requirements, an initiative rare in any history department in the world and unique in South Africa.

Taken overall, it is apparent that, like time itself, the very currency of history, UCT's Historical Studies Department has not stood still over the past 100 years.