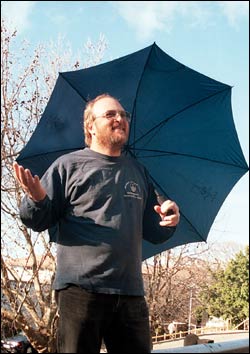 Strange weather: Assoc Prof Bruce Hewitson talks to Monday Paper on whether our dry winter is merely a seasonal blip or part of broader and more serious climate change

Climatologist Bruce Hewitson of the Department of Environmental and Geographical Science likes to avoid the sweeping weather prognoses that tend to inflame the media.

And although his cautious, balanced appraisals of the world's climatological systems might frustrate the sensationalists and doomsday prophets among the popular press, they're based on research that favours a long-term view of why the planet is getting warmer, why the world's ocean levels are rising - and just how this affects our weather.

The media-hype around weather change and global warming is real, extreme in some instances. There is a slide Hewitson uses in a presentation demonstrating the absurdities reached. The heading reads: Aliens Are Behind Global Warming. What follows is a pronouncement that since the 1950s (when El Nino first showed up) the US government has been hiding evidence that a team of alien engineers have been secretly seeding the ozone layer, attempting to transform the planet into an environment that could support intergalactic refugees.

But no, he is not overly concerned that we are having one of the driest winters of the past century portends catastrophe (although he does have a few terse things to say about people who empty the Cape's dams on their gardens). Neither does the unseasonal dry spell suggest an unprecedented drought that can necessarily be ascribed to "the world's current climate chaos" as a city newspaper recently trumpeted. The weather, he says, follows cycles and fluctuations and within a 30-year period these are normal.

But that's not to downplay the significance of what's happening. In the short term, the drought has serious repercussions for farmers, particularly the Cape's wheat farmers, and for the city's water supply come summer. There is no doubt in Hewitson's mind that the world's weather patterns are in a period of flux. "Since 1998 the world has experienced the three warmest years on record."

What is evident in South Africa is that: Anthropogenic or man-made gas emissions have been the major cause of climate change through global warming.

"It is a certainty that we're changing world climate. What is uncertain is how it will manifest at the regional scale."

Hewitson adds that while shorter-term events may bury the topic, the activities of the Intergovernmental Panel on Climate Change and the politics of the Kyoto Protocol continue to profile this as a long-term issue of urgent concern. (The Kyoto Protocol was signed by 160 nations in the Japanese city in 1997. It negotiated binding limits on the generation of greenhouse gasses by developed countries.)

The phenomenon is worldwide. According to Hewitson, every continent has seen record-breaking weather events this year. In the United States there has been an "unprecedented" number of tornadoes (562 tornados during May), while the western regions of that country have reported one of the most extensive droughts ever. And Europe has been exceptionally warm, right up to Scandinavia.

Even the traditionally conservative World Meteorological Organisation was recently prompted to comment on the unusualness of the world's weather this year, citing climate change as the reason.

But there is a good reason for climatologists to be conservative in their prognoses. As Hewitson says, the time horizon is all-important. "You can't go overboard in case you're wrong. These prognoses feed into national policy, on water infrastructure, for example."

Using climate model simulations of the future, climatologists like Hewitson develop "envelopes of possible futures", most of which have important implications for society and the development of adaptation policies.

In the department at UCT is a computational laboratory where regiments of machines are running climate simulations and developing seasonal forecasts to assess climate change projections and their impacts on the country's development and infrastructure. This, explains Hewitson, is one of the most computationally demanding tasks in science.

It is also the largest such facility in Africa. But it is not enough. "While we have good computational resources, we're miles behind our western colleagues in terms of infrastructure. We have huge holes in our understanding of local climate," Hewitson commented.

While there seems little that can be done to prevent near term weather changes, the very real question of generational equity raises key issues as to what action, if any, should be initiated at national and international levels to address climate change. And here, Hewitson likes to bring the subject back to its human scale, particularly to what he terms "generational equity".

"It is an issue for this generation," he confirmed. "We can't go back, the world is committed to an energy-intensive lifestyle. There are long-term lags in the ocean and atmosphere. But we do need to do things for our children and grandchildren. And government needs to adopt a suite of actions, adopting a 'least regrets policy'."

This brings him to the matter of responsibility. The US, for example, emits nearly one third of the world's carbon dioxide emissions. What are the ethical responsibilities of nations generating the most CO2 emissions?

"Japan has already lead the way by helping build sea walls to preserve Male', the capital of the Maldive Islands." According to present levels of sea rise, much of the Maldivian archipelago may disappear in 50 years or so.

He has a more balanced view of climate change. "Everything adapts to climate. There are even advantages, such as extended crop growing periods when warmer conditions are prolonged, which will benefit Africa. However, for every advantage, there are likely many more disadvantages. For example, the danger that malaria-bearing regions will extend to Gauteng as a result of encroaching warmer conditions."

But getting people to take a long-term view is tough, Hewitson notes. "Although everything adapts to climate, pushing the capacity of the environment and infrastructure beyond what it is designed to cope with, is stressing the human and natural systems."

What does concern him, though, is the enhanced vulnerability of undeveloped regions to adapt to climate change. The US, with its resources, would be able to deal with the impact, but not Africa, he cautions.