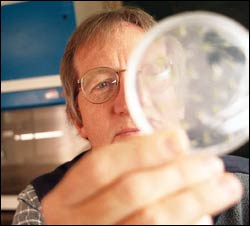 Keeping watch: Prof Ed Rybicki will be keeping a close eye on efforts to produce a series of vaccines against the Human papillomavirus, a leading cause of cervical cancer.

They may be up against the clock as well as a dread virus, but a R12-million grant from the Innovation Fund has UCT scientists on course to develop a batch of plant-based vaccines against the Human papillomavirus (HPV) that would be both economically and technologically ideal for the developing world.

Following on groundwork done for a previous Innovation grant, Professor Ed Rybicki of the Department of Molecular and Cell Biology and a team of researchers at UCT and the Biovac Institute (a new public/private partnership that replaced the country's State Vaccine Institute) are this time round homing in on a more exact target. Specifically, they're hoping to produce cheap vaccines - processed in plant or insect tissue cultures - against HPV, one of the leading causes of sexually transmitted disease (STD) and, specifically, cervical cancer, in the world.

In South Africa, cancer of the cervix is the second most common cancer among women, and around 2.5 million women carry the viruses that cause it.

(Professor Lynette Denny of UCT's Department of Obstetrics and Gynaecology was recently nominated for the Shoprite Woman of the Year Award for, among other things, her discovery of an alternative test to the Pap smear, which, although effective, is difficult to use in a developing world context.)

For women in the developing world, therefore, the best hope of reducing cervical and genital disease is a successful HPV vaccine.

Rybicki and his collaborators on the UCT Plant-Based Vaccines Group, Associate Professor Anna-Lise Williamson (also at UCT) and Dr Woolf Katz and Patrick Tippoo at Biovac, will pick up where they left off with their previous research, in which they looked at a variety of vaccines against HPV, including oral and/or plant-produced.

Now, they will pay closer attention to one particular HPV protein, the major capsid protein L1, considered the most antigenic (easily producing antibodies when it is introduced into the body) of the papillomavirus proteins and thus the bedrock around which current HPV vaccines are designed.

The protein, when produced in a large enough quantity, assembles easily into virus-like particles (VLPs) and has been shown to make very good vaccines, explained Rybicki. It can also be produced in a number of systems, the most effective being yeast and insect-cell culture.

But plants are a promising alternative "system" for the affordable production of large quantities of vaccine in developing countries, as conditions for the cultivation of a wide variety of crops are already established, said Rybicki. "Expansion in production could be met simply by growing greater amounts."

One of the difficulties in coming up with a suitable vaccine, however, is that there are so many strains of HPV going around. Thirteen of the 27 strains of HPV known to infect the genital tract, for example, are associated with cervical cancer.

In search of a vaccine that would stump as many strains as possible, Rybicki and his team have inserted a piece of another HPV structural protein into the L1 protein. "This is based on the idea that it will broaden the cross-reactivity of the immune response, which otherwise tends to be quite specific, ie it won't recognise similar but not identical viruses," Rybicki said.

"But with this new protein included, the breadth of specificity is increased. Our improved vaccines should therefore cover some of those strains that current vaccines don't offer protection against."

Rybicki's team, and the funders, have some very clear goals in mind. "The aim is to come up with products in vials, ready for phase one human testing, in three years," explained Rybicki.

The vaccines could come in many formats, ie it could be injected, or administered in tablet or liquid form.

As much promise as their work shows, the R12-million - "adequate to the task" - from the Innovation Fund, managed by the National Research Foundation (NRF) on behalf of the national Department of Science and Technology (DST), was not easy to come by for Rybicki and his team. The first tranche of the grant was only recently deposited, more than 18 months after the first application forms were submitted to the NRF.

"The application process was beyond belief," commented Rybicki.

And obligations are equally rigorous. The group will have to submit quarterly milestone and financial reports.

The funding can also be pulled after 18 months should the NRF be unhappy with the group's progress.

"It's an awesome responsibility," noted Rybicki. "It's frightening in that obviously there's an element of uncertainty - to guarantee progress is difficult.

"But we're confident enough that we will make sufficient progress. We're happily going on with the work and planning for three years."