Health sciences reach out to alumni 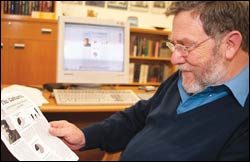 Reading is Cathartic: Prof Ralph Kirsch has reinvented the erstwhile-scandalous 82-year medical student publication, Cathartic, as an alumni newsletter for the Faculty of Health Sciences.

In a drive to restore the lines of communication with its thousands of alumni, the Faculty of Health Sciences is re-resurrecting an 82-year old student publication that - in its scandal-mongering heyday - very often nettled faculty administrators into outlawing it from student stands.

The faculty's alumni association will shortly release the latest edition of Cathartic, a newsletter first published at the medical school in 1921 by student provocateur Harry Zwarenstein. According to Professor Ralph Kirsch of the Department of Medicine, who was recently selected by dean Professor Nicky Padayachee to head up the alumni association, Cathartic, like any good student production, often fell foul of UCT authorities and was banned more than once because of its controversial content.

(Zwarenstein later went on to more reputable things, such as teaching at UCT and developing, in 1933, the Frog [Xenopus] Test for pregnancy, which would become the universal pregnancy test for some 30 years. He was also appointed as UCT associate professor emeritus in 1966.)

Nowadays, of course, Cathartic is more respectable, featuring news and research stories from the faculty, and reports on the annual medical reunions hosted at UCT. In addition to chairing the faculty's alumni association, Kirsch is also serving as writer/editor/designer of Cathartic, as he did in 1994 when, to acclaim from its readership, he first revived the publication as an alumni newsletter.

As communiquÃ©, Cathartic will lead the faculty's efforts to keep alumni informed of what's happening at UCT, but will also lure them back to the medical school. "One of the first things Professor Padayachee said he wanted to do after being re-appointed as dean was to establish closer links between alumni and the faculty," said Kirsch.

The faculty, he added, could profit in many ways from such a close bond. "We need to use our alumni as many of the American universities do, as an extended family.

"There are many things our alumni can do for us, besides the obvious of providing us with donations, such as teaching here, or serving as public relations people or even as advisors to the faculty."

And in return, Kirsch added, alumni will again have a cherished sense of belonging.