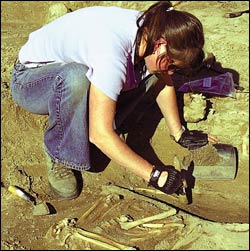 Buried baby: PhD student Genevieve Dewar meticulously clears away the debris from the skeleton of an infant buried in a coffin at Prestwich Place, which is believed to form part of an old slave burial ground.

UCT archaeologists believe that a newly discovered unmarked burial ground in Green Point is of international significance, and that it has profound implications for city planning in the area, writes Andrea Weiss.

The archaeologist's brush painstakingly and lovingly clears away the outer layer of earth and the remains of a pint-sized coffin from the skeleton of a baby.

As PhD student Genevieve Dewar brushes away the grit, the details of the relatively well-preserved infant become clear. The rotten wood has melted away, and a glimmer of green is all that is left of a shroud pin.

Close by, the torso of an adult is gradually being exposed, indicating that an earlier burial had to make way for this baby's coffin. Elsewhere on site there are full skeletons in repose, amid small piles of jumbled bones indicating areas where burials were disturbed. 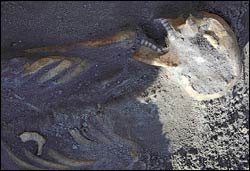 Poignantly, of the scores of bodies found on what is believed to have been an unmarked 18th century slave burial ground, it is mainly the babies who have the luxury of coffins, perhaps because they were smaller and more affordable.

Earmarked for development into a mixed residential, office and retail centre, work was stopped at Prestwich Street, Green Point, five weeks ago when the contractors started uncovering human remains.

Initial estimates were that it would take about six weeks to exhume the graves on site, but after UCT archaeologists Tim Hart and Dave Halkett, from the Archaeology Contracts Office, were called in as principal investigators, they quickly discovered that they were dealing with an unprecedented number of bodies.

Halkett said they found up to four burials per square metre on the site, with bodies stacked one on top of the other. They have already passed the 200 mark for intact skeletons. They have also removed an estimated 100 disturbed bodies.

Given this density, it is believed there could be up to 800 skeletons on site. The density of the burials, and the disturbance of earlier bodies before they had properly decomposed, indicates that it might have been used during an epidemic, possibly smallpox.

But all these questions remain to be answered fully, including the chemical analysis which archaeologists use to determine diet at different phases of life, which can give important pointers to the background of those who are buried. 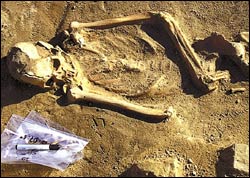 Silent repose: One of the intact skeletons.

From an earlier burial ground excavated by the Archaeology Contracts Office a few blocks away at Cobern Street, researchers Glenda Cox, Judith Sealy, Carmel Schrire and Alan Morris were able to tell which of the skeletons were first generation slaves, which came from Africa and which from the East, by studying their dietary history, among other things.

Now the pressure is on to clear the Prestwich site as, by law, the developer has to pay for the unforeseen costs of both the work stoppage and the archaeologists working on site. The delicate balancing act is to derive maximum cultural heritage potential out of the area while keeping delays to a minimum.

Within these constraints, the work has to be carried out professionally, carefully and as quickly as possible, with the team noting the position of bodies, the direction in which they are buried, and what grave goods accompany them. All this has to be carefully documented using digital cameras and surveying equipment.

In addition, they are also unearthing the layers of Cape Town's history, including late stone age artifacts at the surface, a smithy's forge and items such as porcelain from the time of the first building which was erected around 1860.

Halkett points out that the discovery of this second burial ground in Green Point underscores the need for the City of Cape Town to draw up a plan to deal with the redevelopment of Green Point, which has become hot urban property.

There are several marked graveyards in the area behind Buitengracht Street, and now this discovery of a second unmarked graveyard, seems to indicate that parts of Green Point could indeed be a huge burial site. 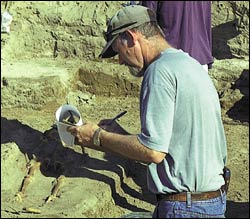 Hard at work: Dave Halkett of the Archaeology Contracts Office

While this has profound implications for town planning in the area, it also has huge potential for cutting edge research into slave history.

Halkett, Hart and their team believe that they are working on a site of international significance, in the order of the New York City African burial ground in Manhattan, which has been the subject of much study.

Apart from the pressures of time, money and human resources, an additional difficulty has arisen over where to store the hundreds of remains now being unearthed. An idea that has been put forward is for a memorial park where the remains could be kept, and an interpretive history of slavery at the Cape could be put on display.

All these issues will be of pressing concern in the months to come as the work on site continues.

For now, though, it's all hands on deck for UCT's Department of Archaeology, which is being stretched to the limit in dealing with this latest discovery. 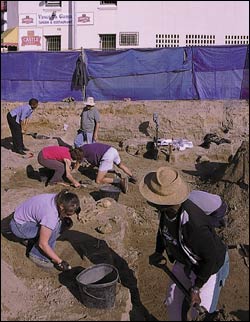 Dig site: Prestwich Place where hundreds of human skeletons are being uncovered by UCT archaeologists

In keeping with the legal requirements, Antonia Malan of UCT's Cultural Sites and Resources Forum, is organising a public meeting for all interested parties at St Stephen's Church in Riebeeck Square, central Cape Town, on July 29 at 17h00.