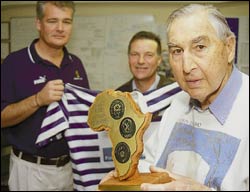 Visionaries: Rugby Club president, Dr Cecil Moss (far right), and old boys such as (far left) Brendan Fogherty and Spencer King, club administrator, have not only turned the UCT sides into fearsome entities, but have also been wooing plenty of black players into their fold.

The UCT Rugby Club is pretty chuffed with its performance at the recent SASSU games where the under-25 side was voted the team that played the most attractive rugby. Of particular pride to the side was the fact that it fielded six black players in doing so.

These results are the payoff of a campaign started back in the late 1990s. Struggling to hold its place in the premier league and not a black player in sight (and only a handful of student players making it into the senior side), the club, with a nudge from the UCT Sports Council, came up with a policy to steer it back to its glory days.

Vision 2000, impelled by old boys like Phil Kilroe, Neil MacDonald (who still play for the club's "oldies" side, UCT Carpe Crocks) and club president Dr Cecil "Doc" Moss, was the policy document that would guide much of the club's activities for the next few years.

"Part of the vision was to again establish UCT as one of the top three teams in the Western Cape, and return it to its heydays by upholding the tradition of open running rugby that the club was renowned for," said Spencer King, another old boy who was appointed by the club to watch over Vision 2000. "Also, very importantly, it was about getting previously disadvantaged players into the club structure."

To do this, the club went on an aggressive recruitment drive at schools and rugby tournaments. At the same time, it realised that it needed the wherewithal to get learners and students into the club.

"It's all very well to say to players to come to UCT, but a lot of them couldn't afford to do so," noted King.

The club therefore established its UCT Rugby Football Club Trust Fund, which stocks its coffers with contributions from, mostly, old boys. In 2000, Sakekile Gqeba, head prefect at Wynberg Boys' High, became the first student to be wooed to the University via a bursary from the fund.

These days, the club boasts 35 black players in its competitive fold. A recent survey also showed that more than 50% of the roughly 450 players in the "social" internal league are black.

In addition, Isma-eel Dollie was voted player of the tournament at the SASSU games, and Vokai Hove - who has occasionally trotted out for the first team - got the man of the day nod after the Tukkies game.

Players in the junior sides - mostly in the under-21 and younger teams - are also beginning to contest for spots in the senior team. "We always knew that there was a lot of talent out there - all we had to do was go and find it and nurture it," said King.

For hands-on president and former Springbok coach Moss, who accompanied the team to the SASSU games as tour manager, it's satisfying to know that he's never (not in his Springbok days, not at UCT) had to treat black players differently. "All our players are selected on merit," he said.

"We've never seen black players as being separate from other players - we just see them as players."