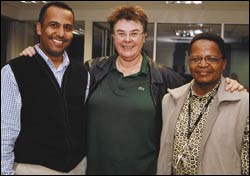 With the jackhammers finally laid to rest and the paint dry, the humanities faculty officially opened their new Bessie Head Computer Laboratory in the Beattie Building last month, a celebration that included many of the faculty's staff, including Dean Professor Robin Cohen, Deputy Dean Professor Joan Hambidge (whose portfolio in this position includes information technology developments within the faculty), and guests such as Deputy Vice-Chancellor Professor Martin West.

The facility offers 80 spanking new machines (Pentium4 2.2 gigahertz, operating on Windows 98 and the Office 2000 suite and humanities-related software such as NVivo) and work stations. The facility has been designed to offer three single classroom combinations or a single teaching space for larger classes and includes full multimedia facilities with provision for lecturers to connect their laptops.

The laboratory was commissioned in response to the increasing needs within the faculty for student computer access. "Despite being registered in the largest faculty, humanities students have long had to deal with inadequate provision of computer facilities, as the long queues outside the Southside labs attested," said Vicki Scholtz, the faculty's information technology manager.

"As teaching staff began making increasing use of the Southside facilities for formal class teaching, discretionary access for students was squeezed, placing strain on the faculty's commitment to producing information literate, and IT literate, graduates," she added. "The new facility was designed as a teaching facility, to accommodate all formal class teaching currently scheduled in Southside, freeing up Southside as a discretionary facility."

Scholtz said that the facility also extended the commitment to improving the information technology infrastructure available to students and staff within the Faculty, to facilitate improvements in teaching and learning, research and management and administration.

And although the air conditioning offered some interesting guttural additions to the proceedings, the function provided Professor Sizwe Satyo of the School of Languages and Literatures with an opportune moment to talk about writer Bessie Head, from whom the facility takes its name.

One of Africa's most prominent writers, Head's works deal extensively with recurrent African themes: discrimination, refugees, racialism and poverty as well as interpersonal relationships. She was born in South Africa in 1937, the child of an "illicit union" between a black man and a Scottish woman, who was later committed to an asylum as a result.

The baby was taken from her mother and raised in a foster home. Head was educated in a missionary school. Later, after a brief stint as a teacher, Head began to explore her burgeoning writing skills, taking a post at the Golden City Post. Experiencing personal problems, she moved to Botswana as a teacher. She remained in this country with "refugee" status for 15 years. All three of her major novels, When Rain Clouds Gather, Maru and A Question of Power, were penned in Botswana.

Scholtz mooted the name some time ago. In her original proposal she wrote: "The Faculty of Humanities has traditionally been home to a diverse student population, and a diversifying staff population. Recognising the need for cultural symbols that are inclusive, and that seek to celebrate the richness of our diversity, the Faculty has embarked on a programme to commemorate events and people of note who embody the ideals to which we strive. In this spirit, we propose that the new computer lab be named after Bessie Head."