Student vaults his way to victory 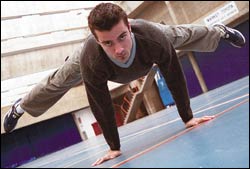 Heels over head: Gary Birch was one of the UCT stars at last week's SASSU and national gymnastics championships hosted at UCT.

Science student Gary Birch was the big winner among an 11-strong UCT envoy that scooped a haul of medals at the South African Student Sports Union (SASSU) and senior national gymnastics championships, hosted at one gathering at UCT last Monday.

Birch took overall first place in the level five category - one grade short of the Olympic division - of the national championship, and finished second in the SASSU event. He earned his berths on the winners' podiums by sweeping both the parallel bars and pommel horse competitions, and securing second-place spots in the floor, vault and high bars bouts.
Birch and the four teammates that joined him for the national championships - Mark Vismer, Shaun Moore, Anthony Goble and Adrian Konstant (all competing at level four) - also monopolised the first five places in the national championships.

In addition, Margot Scheffer (level one) won overall gold in her category, while Jackie Payne finished third in the level two competition.

The rest of the UCT team also bagged a whole bunch of medals in the SASSU games, securing third place overall. The squad's three level one competitors, who only took up the sport at the beginning of this year, also featured among the medallists.

The SASSU games pitted gymnasts from Free State, Natal, Potchefstroom, Pretoria, Stellenbosch universities and UCT against each other.