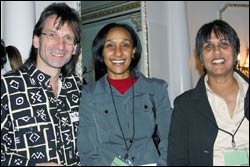 A new biotechnology innovation centre, Cape Biotech, was launched in the Western Cape last month, a welcome boost not just for biotechnology, but also for skills development and job creation in the region. The centre is the third of the South African Biotechnology Regional Innovation Centres (BRICs), all funded by the Department of Science and Technology.

According to a press statement, the three BRICs will not operate independently, despite their regional focus. A process of collaboration will create national cohesiveness between all three centres.

Cape Biotech, whose chief executive officer is Dr Mark Fyvie, has been awarded R12.5-million for 2002, R23-million for 2003 and R52-million for 2005. This funding has been committed to establish the Western Cape's BRIC under the auspices of the SA National Biotechnology Strategy. (The funding for all three BRICs is about R140-million a year.)

Fyvie is a UCT alumnus who obtained his BSc(Hons) in molecular biology in1993. He has a PhD (1993) in molecular genetics from the Institute of Biotechnology at Cambridge.

"Biotechnology is a cross-cutting technology with wide application across sectors and biological boundaries," he said. "The biotechnology industry is research-intensive, spending between 40% and 50% of revenue on research and development."

Because the development and application of biotechnology required a "convergence of skills" from a variety of disciplines, the field also necessitated appropriate combinations of biochemistry, genetics, information technology, engineering and other fields of expertise, he noted.

"As it is a multi-disciplinary field its development will also require links and partnerships between science, engineering and technology institutions (SETIs) as well as private companies," Fyvie added.

It is thus a highly networked endeavour that will also harness academic input from a variety of fields within UCT. Several familiar UCT names are linked with endeavour, including Professor Sue Harrison (chemical engineering), who is a member of the Cape Biotech Board, and Dr Steph Burton, listed as a member of the centre's Scientific Advisory Committee.

"UCT is undoubtedly one of the regional leaders in high-quality biotechnology research," Fyvie added. "There is certainly a very real possibility that globally competitive products can be spun out of the research framework at the University."
Cape Biotech has two main functions: industry stimulation and capacity creation; and the dissemination and management of government funds through investment in commercially promising projects.

"Through a portfolio of projects that are regionally focused, Cape Biotech will act as a centre for the development of a range of businesses and new product offerings, with the capacity to support these." This, Fyvie said, would contribute to the development of world-class skills, economic development and job creation in the region.

"With an interest in capacity creation, portfolio and knowledge management, Cape Biotech is thus a cluster development initiative in addition to being a funding body," he continued.

It is estimated that 60% of South African biotechnology start-ups approaching venture capitalists for funding originate in the Western Cape.

In addition, the region was known for its rich plant biodiversity, which provided a unique source of novel molecules.

"The aim is to create as many commercially viable life sciences entities in the Western Cape as possible," he concluded.
The centre has short-listed 16 projects for possible development, 75% of these relating to human health and the balance to industrial bioprocessing.