Campus whistles to a safer tune 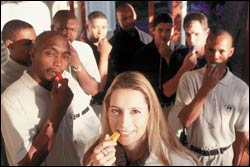 Women students and staff who work late on Campus are among those who will be issued with whistles as part of a Blow the Whistle on Crime Week from July 21 - 25.

The promotion of a crime awareness programme, which encourages all students and staff to anticipate and recognise crimes and safety risks, is the purpose of Campus Protection Services' (CPS) Crime Week.

Activities taking place on the Plaza during this week will include the distribution of hundreds of whistles to women students and staff members who work on Campus late in the evenings, as well as the setting up of road-blocks, access card checks and the dissemination of important information via posters, flyers and electronic signboards.

According to Stuart Wragg, CPS Security Manager, the purpose of operational activities, such as road-blocks and access card checks, is twofold.

"Road-blocks will be set up every night during the second week of the new semester. Besides using these to investigate who is coming onto Campus at night, they provide the opportunity to hand out our whistles and improve awareness through the circulation of flyers containing important information."

CPS operate from six service centres, 24 hours a day, seven days a week. They are able to deal with the practical and legal aspects of crime, such as first aid or what to do in the case of sexual assault.

They have adopted a multifaceted approach when dealing with crime at UCT. This entails the combination of a physical presence with technology and community awareness.

On Campus the physical presence refers to a team of highly-trained staff deployed to different areas and backed up by technological aids in the form of alarms, access control and closed circuit television (CCTV).

For Wragg and his team, the start of any new semester is a problematic period with returning students and staff having forgotten previous security precautions.

"There have been no serious crime trends over the past three weeks but we call on the University community to re-focus and follow the basics in terms of crime prevention," he affirmed.

Staff and students are urged to become more vigilant and keep in mind the following safety pointers: Report all incidents which could be related to a crime or an attempted crime, for example, a door which seems to have been forced open.

Security awareness paid off recently when an alert staff member from the relations and fundraising department foiled an attempt to steal a data projector.

A man presented himself at the Old Admin Building saying he had come to collect a faulty data projector and offered a photocopy of a company letterhead. The man was told to leave the premises after enquiries by the staff member showed no faulty projector had been reported.

Similar incidences have been reported from Upper Campus and the medical school, where unfortunately a data projector was stolen.

Wragg pointed out: "No equipment of any nature should be released to any third party without the express consent of the manager concerned. All staff should be aware of this and should follow this protocol strictly when it comes to the repairs or servicing of University equipment."

With hijackings in the greater Cape Town area on the increase, the police have issued warnings to people to be particularly observant when driving.
"Although there have been no hijackings on Campus, we are passing on this information from the police," he said. "Be aware when approaching robots or intersections and when arriving home at night.

"If you notice someone is following you, drive directly to the nearest police station. If you are confronted by hijackers, be obliging. Keep your hands visible and refrain from making any sudden movements," added Wragg.

UCT remains committed to a zero tolerance approach to crime. However, the University is a microcosm of the larger community and continues to be affected by crime, said Wragg.

"It is crucial to ensure buy-in from the University community by means of an awareness programme. We call on everyone to assist us in reducing and eliminating crimes and safety risks and thereby ensuring a safer Campus."