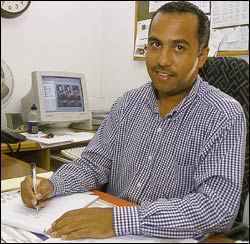 Anyone for doubles? This week, UCT staffer Robert Worship will be graduating for the second time in six months.

Part-time study holds many rewards, but those who choose to run the gauntlet would agree that it demands a juggler's composure to balance the parallel demands of home, work and academia.

Robert Worship, research finance and operations manager in the Humanities Faculty Office, is but one in a long line of UCT staff members to have taken up the challenge, although it must be noted that he does have a couple of unique elements to his story. For one, this week's ceremonies will mark Worship's second consecutive graduation, having already made his way up to the podium in December 2002.

Then there's the fact that last year, while slaving away at two part-time courses, he got a little sidetracked the day before a major examination when he had to assist and encourage his wife through the laboured birth of their first child.

For about five months of last year, Worship's hands were pretty full, rounding off a programme on higher education management at the Graduate School of Business (GSB) while starting on an honours degree in financial analysis with the Faculty of Commerce. All this while keeping the Humanities Faculty's research finances in order, of course.

Then somewhere in the middle of that (in April, actually), his wife, Liezl, gave birth to their first-born, Cleo. While the baby was no surprise, the delivery itself was, with Cleo making her delayed advent the day before her father was due to write the final statistics examination for his honours course.

The couple went in to the hospital at around eight the morning (a quick delivery, and still plenty of time for study, Worship must have reasoned), but the reclusive Cleo was only born at around eight that evening. The high of recent fatherhood notwithstanding, Worship did not forget that he had studies to attend to.

"I was over the moon," he reported, "but after the baby was washed and settled in, I went home to hit the books."

Possibly buoyed by the birth of his daughter, he passed the exams. And, later, also finished the work on his GSB course.

His schedule continued unabated for the rest of 2002, however, with the newborn taking up the time (and more) previously allocated to the GSB programme. Her early mornings had to be counterbalanced with the late nights demanded by work and study.

Despite his best efforts, Worship did, however, miss out on the opportunity of a double graduation at last year's December ceremonies, where he and about 20 other UCT staff member received the paperwork for their successful conclusion of the GSB course.

Recently, he did wind up the Honours programme. Although not without plenty of help at home, he points out.

"My wife was the kingpin there - she did most of the pyjama drills," he noted.

Now with a little more time on his hands, Worship can review the past year at leisure. "It was tough, but also enriching," he observed of the honours degree.

Although, he adds, he won't be signing up for any more classes soon. At least not for the next year or so.