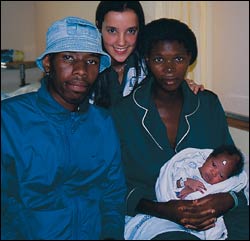 Lady Lucky: Sixth year medical student Lindsay Bick (back), with mother Cwayita Ncise, the baby's father Ndumiso Mashiyane and the miracle baby, Nhlahla ("lucky" in Zulu). It was Bick who first saw Ncise at Somerset Hospital and reported to her registrar that she couldn't find the baby's head in the pelvis.

Miracle baby Nhlahla's story and picture have been splashed across the world's media: the BBC, CBS Canada, Radio Asia, and even the front page of The Times in London. HELEN THERON of the Monday Paper paid a recent visit to Groote Schuur Hospital to see how mother and baby were doing, and to get the behind-the-scenes story which features both staff and a student of the UCT's Faculty of Health Sciences.

The subject of intense media interest, Nhlahla made world headlines recently after senior obstetrician Dr Bruce Howard gently extracted her, at 39 weeks, from behind her mother's liver, putting paid to some formidable survival odds.

What were the chances that the zygote (fertilised egg), smaller than a pinhead, would slip from 20-year old Cwayita Ncise's fallopian tube, survive and then embark on a miraculous upward odyssey, via abdominal fluid and between the convolutions of intestines and internal organs, to fortuitously implant itself on her mothers' liver, an organ with sufficient blood supply to nurture the embryo to full term? 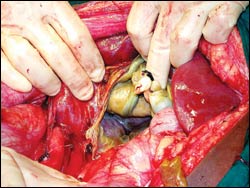 Post delivery: The placenta remains attached to the liver.


Dubbed "the liver baby", little Nhlahla presented the UCT medical fraternity at Groote Schuur Hospital (GSH) with some anxious moments, however. Only 14 other such extra-uterine cases had been reported. As a result of bleeding complications, only three babies survived.

Extra-uterine pregnancies, which can develop on the outside of the uterus, or even get their blood supply from the bowel, are always difficult cases. But Nhlahla's location in her mother's abdomen initially had the UCT and GSH medics, registrars and specialists scratching their heads.

One week short of full-term, her mother had been referred to Somerset Hospital with high blood pressure. On duty in the labour ward that night was sixth-year medical student Lindsay Bick, who completed Ncise's clerk sheet (which includes patient details, etc).

"She looked like a normal pregnant woman," Bick recalled. However, on examining her, Bick couldn't find the baby's head, usually easy to detect in the pelvis at 39 weeks. "The baby's bottom was also very high in the abdomen," she reported. Puzzled, she alerted her supervisor, registrar Dr Saadiqa Allie. Allie conducted an ultrasound scan and confirmed Bick's misgivings; she could not locate the baby's head either - and the uterus was empty.

Transferred to GSH, Ncise was examined by senior registrar Dr Howard Manyonga and consultant Dr Silke Dyer. Subsequent scans confirmed an advanced extra-uterine pregnancy and the location of the placenta in the upper abdomen.

"We see about five or six cases of extra-uterine pregnancy a year," noted Howard, a specialist in gynaecological cancers and difficult surgery. As these cases are rare, he remembers looking forward to the operation.


Inside the theatre, the drama deepened. The Caesarean section revealed a further puzzle; all Ncise's organs were in place (even the empty uterus), but there was no baby. Flanked by an enthralled cluster of 30 or so doctors and fifth- and sixth-year medics (the news had spread quickly), Howard described the moment as "very frightening". Instead of a foetus, he found a "massively enlarged" liver and placenta.

"It was a time bomb waiting to explode."

Krige was at a liver clinic nearby when he received a distress call at 11h00; a cryptic message from the obstetrics theatre to deliver a baby, not his usual line of work. He rushed to a scene of "enormous anxiety".

"The placenta in its amniotic sac, lined the liver. Its removal would have resulted in catastrophic bleeding," he elaborated. In highly complex situations like these, he said, "there are no rules of engagement".

"These cases require on-the-spot improvisation and every situation will be different. But it was clear we had to find a way in."

The team mobilised the liver, working quickly to free it from its attachments. And providence is always kind. At the bottom of the large organ Krige and Howard found a 5 cm diameter "window", a small area where the placenta and amniotic sac weren't attached. It offered the sole entry point. An incision was made and Nhlahla's delivery began, feet first.

"It was extraordinary," Krige remarked. "A breach delivery from the liver."

There was initially little time for euphoria, however. The baby was distressed and needed resuscitation. The placenta had also started to bleed and the bleeders had to be tied off. Krige and the team were also left with a crucial decision: how to manage the remaining placenta.

"The trick was to leave the placenta attached to the liver," Krige said. The extraneous tissue would be absorbed in two months or so and the organ would return to its normal size. "The liver has phenomenal regenerative capacity," he confirmed.

The news of Nhlahla's birth spread like proverbial wildfire. Within hours, news hounds, armed with large cameras and even larger lenses, thronged the corridors of GSH. "It has been unbelievable," Howard remarked. "My phone has not stopped ringing."

Baby Nhlahla's story and picture have been splashed across the world's media: the BBC, CBS Canada, Radio Asia, and even the front page of The Times in London. Now, Ripley's believe it or not want the story, the latter raising more than a few eyebrows in the medical streets of GSH.

The remarkable success story has thrust GSH into the spotlight. Both Krige and Howard are full of praise for the multidisciplinary team's efforts and the sterling obstetrics services available in the province. However, there is an irony that has not been lost on them.

"If Cwayita had had access to ultrasound from the beginning, as is the case in first world countries, the pregnancy would have been terminated," Howard commented. "Now we have a healthy mother and baby," he beamed. The case will be well documented as he and Manyonga plan to write a report for submission to a respected medical journal.

Nhlahla, by the way, is the Zulu name for "lucky". One feels she could as easily have been named Umlingo, or "miracle". And though some may be tempted to follow her life's path, just to see why fate was so determined she should be counted among the world's populace, her mother has it all worked out: Nhlahla is going to be a doctor, she says emphatically.