There's something cheesy about this lot 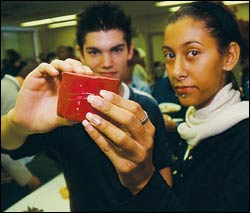 Say cheese: From left, Evan Robinson and Jerusha Soomar, who have bagged a free cheese-making course, show off their winning handiwork at the Department of Molecular and Cell Biology's cheese-making competition last week.

They had to patiently bide their time for two and a half months, but last week 45 nervous second-year food microbiology students finally got to show off their cheese-making prowess at a special function where their efforts were put to the gustatory test.

The event was the culmination of a practical task introduced to the course four years ago by convenor and avowed cheese-lover, Dr Sagadevan Mundree, who wanted to add some flavour to the food technology class taken by students in the Department of Molecular and Cell Biology's biotechnology stream. Vinegar and beer making were options at the time, but presented some logistical and cultural problems.

He decided instead on cheese, and convinced a small-scale dairy-producer in Wellington, Moira Hobson, to teach him some of the finer points of cheese-making. Now, each year, he passes this aptitude on to his students, who are required to make some cheeses of their own for the class.
In addition to finding a creative way to present his topic, the cheese-making also holds some very useful scientific lessons, said Mundree. "I wanted to show the students how micro-organisms are used in many different foods that we consume, and to illustrate what an important role micro-organisms play in food production," he explained.

And while cheese-making is a demanding process (three hours' fastidious toil and pernickety storing demands), it's also relatively simple, said Mundree. So for instance, he uses tools forged in the department's workshop from some very common material, such as a cheese press constructed out of drainpipes and wood pieces.

He also made sure that the ingredients (like rennin, the enzyme that coagulates the milk) were of the kind that could be bought from just about any supermarket or pharmacy. "The point was that students who wanted to, could easily replicate the process at home," noted Mundree, who does the same over vacations.

Two and a half months ago, this year's intake of students, working in teams of two or three, prepared their individually spiced and flavoured Derby curd (this year's cheese of choice), which they then waxed and stored in preparation for last week's tasting. Each team had to produce two 250-gram cheeses.

For the gathering, Mundree conscripted the cheese-tasting services of Hobson, as well as that of Norman Robertson and Peter Vassan of the Agricultural Research Council's (ARC) Animal Nutrition and Products Institute (ANPI) in Elsenburg. Robertson provided a short history of cheese-making, and guided guests (who acted as judges on the day) through a list of criteria for a good Derby cheese.

The judges then did their tasting, allocating points for taste, colour and texture for each cheese on offer. The winning Derby proved to be that of Allen Matimba and Vanessa Mlandeli. Robertson and Vassan also selected two winners of their own, Evan Robinson and Jerusha Soomar, who as reward will shortly be attending - free of charge - a two-day cheese-making course at their institute.