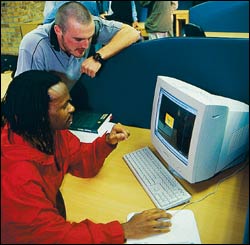 Pointing in the right direction: Nicholas Gibson (standing) and Mduduzi Dlamini, both Master's students with the EBE's CFD Group, take the newly-refurbished CERECAM lab a spin.

Heralding a fresh epoch in its 22-year existence, the Centre for Research in Computational and Applied Mechanics (CERECAM) last week opened its revamped Computational Laboratory in the Menzies Building.

Speaking at the opening, Centre Director, Professor Daya Reddy, noted that the opening followed a period during which CERECAM reassessed its major research foci and directions. More recent developments, specifically the greater emphasis on computational fluid dynamics (CFD), had not only persuaded the Centre to "take stock of where we are going", but also convinced it to give its existing lab a major overhaul, said Reddy.

Spearheaded by Dr Chris Meyer, a senior lecturer in the Department of Mechanical Engineering and CERECAM member, and Erica Schulschenk, assistant to the Dean of the Faculty of Engineering and the Built Environment (EBE), the R250 000, one-month revamp was recently completed. In addition to acquiring a few more hectares (courtesy of the Geomatics workshop next door), the lab was also fitted with new carpets, a fresh coat of paint and an air-conditioning system, among other things.

In addition, CERECAM has also purchased a number of sleek carousels to house its new high-tech workstations.

According to Meyer, CERECAM's work is based on three pillars - research into computational fluid dynamics (CFD), finite element (FEM) analysis and discrete element modelling. The lab will therefore, as before, be used by postgraduate students in these fields for their exacting computational work.

CERECAM, said Meyer, serves as the computational hub for a host of other EBE research groups, such as the Minerals Processing Research Unit (MPRU) and other groups in chemical and civil Engineering. "The Centre leaves a very large footprint around the UCT Campus," he added.

Funding for the work on the lab was secured from companies within South Africa's platinum industry that, as part of a joint venture, have been supporting the MPRU's CFD research for some time, reported EBE Dean, Professor Cyril O'Connor. In turn, CERECAM provided essential computational experience in the CFD field. "It became very clear to us in the MPRU that CFD is going to be critical to major developments and major breakthroughs in the mining and minerals processing industry," noted O'Connor. "And it was an easy decision to fast-track this project."