Oceanography students work in the teeth of Roaring Forties 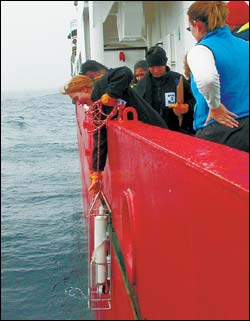 The SA Agulhas is ploughing through choppy seas, heading into the teeth of the Roaring Forties, approximately 47 Âº S 37 Âº E off the Prince Edward Islands.

The weather is foul and the location remote, but nowhere else in the world do oceanography honours students routinely get to train in conditions like these. For the group of nine UCT postgraduate students, supervised by Dr Isabelle Ansorge, the recent five-week excursion to the Southern Ocean was sometimes more than a breeze.

The Prince Edward Islands, consisting of Marion and Prince Edward, constitute the southernmost part of South Africa's territory. These are some of the remotest islands on the planet, five days sailing from the mainland. Annexed by South Africa in 1947, the 250 000-year old volcanic outcrops have provided an excellent home for biological, meteorological and geological field research, said Ansorge.

The Oceanography Department has been involved in the Department of Environmental Affairs and Tourism's South African National Antarctic Programme (SANAP) for 13 years and since 1996 their marine research has focused on the ocean environment of these two ocean bound outcrops. "Our students now have an opportunity to participate on the scientific survey during the annual relief voyage to the islands," Ansorge explained. 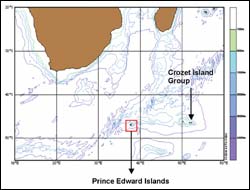 Face to face with capricious conditions, the group gained hands-on experience in collecting hydrographic and biological data. "It's a unique opportunity; the Southern Ocean is very hostile and carrying out oceanographic measurements in these conditions provides an exciting yet valuable practical experience for them," Ansorge commented.

The voyage began on March 25 and the SA Agulhas reached the Islands on April 30. "A total of 212 oceanographic and biological stations, including underway XBT (Expendable Bathythermograph) and CTD (Conductivity-Temperature-Depth) stations RMT-8 (rectangular-midwater-trawl), trawls and bottom dredges, were completed during the expedition," Ansorge noted.

Watches were 12 hours long and students were responsible for analysing the hydrographic dataset and incorporating this information into their compulsory cruise report.

Home to millions of nesting seabirds as well as a "haul out" for certain threatened marine mammals, the area has been declared a protected natural region and is set to become a Natural Heritage Site. "Surrounded by vast tracts of ocean, it has always been recognised that the ocean environment, in particular the upstream region of the Prince Edward Islands, must be crucial to the ecosystem of the Islands," Ansorge elaborated.

Hydrographic data collected during last year's voyage under the programme Dynamics of Eddy Impacts on Marion's Ecosystem (DEIMEC I) to the Islands demonstrated that fracture zones within the South West Indian Ridge act as a "choke point" to the eastward flow of the Antarctic Circumpolar Current, resulting in the convergence of the Antarctic Polar Front and the southern branch of the Subantarctic Front. "The juxtaposition of these fronts at this location is seen to lead to locally elevated biological activity," Ansorge added. "Recent studies on the grey-headed albatross have shown that these birds exploit this region preferentially during their foraging excursions away from the Islands. There is also anecdotal evidence that the region supports high densities of squid."

A preliminary paper, Studying the Impact of Ocean Eddies on the Ecosystem of the Prince Edward Islands: DEIMEC II involving all the students as co-authors, has already been submitted to the South African Journal of Science.

(DEIMEC is a joint programme between UCT, the Southern Ocean Group at Rhodes University, and the University of Fort Hare.)