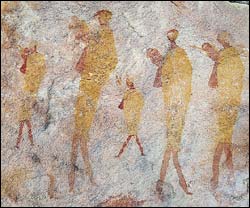 The acclaimed Living Landscape Project in Clanwilliam has added another string to its bow following the release of a CD of local rock paintings in what archaeologist Professor John Parkington believes is the first of its kind in Africa. The CD has been designed and created by two archaeology MSc students, Bastian Asmus and Conny Meister.

"There are CDs of rock art in Europe and North America, but nothing on African or southern African rock art it would seem," he ventured. The CD is based on the book, The Mantis, the Eland and the Hunter, which acts as an accompaniment to the historic Warmhoek rock art trail for which the Clanwilliam area is becoming well known.

Like the book, the CD provides a mirror of the images found in the shelters along this trail, images depicting the lost culture of the indigenous San people, with their rich mythology, hunting rituals, religious thought and knowledge of local plants. Whether you are an armchair connoiseur of local heritage or a student of history, the CD affords "extra capacity". 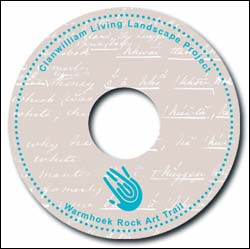 New release: A CD of the Warmhoek rock art trail has been produced as part of the Living Landscape Project in the Clanwilliam district.


"There are some wonderful 3600 photographs showing the rock paintings in their surroundings, providing a better visual idea of the landscape than the book does," Parkington commented. This is important as the paintings are strongly connected to the landscape, once home to the San.

An additional touch of authenticity is lent by Parkington's voice (a professional narrator would have cost too much). He wrote the text for the CD and, having worked in the Clanwilliam district for over 30 years, knows the terrain intimately. 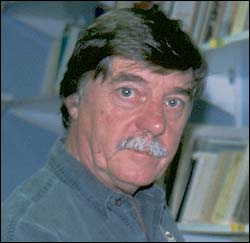 rof John Parkington (below), who was also the narrator, wrote the text. (Parkington is a trustee of the Krakadouw Trust, which underpins the enterprise, and the leader of the Project.)


The revenue earned from the CD (like all other revenue from the Project with its job creation focus) will be ploughed back into the Project. The Living Landscape Project has successfully used the Clanwilliam landscape as a framework for teaching in local schools and developing sustainable business ideas for local people. The programme has created an archive of historical, archaeological and environmental information with links to a job creation initiative, a new schools curriculum and new heritage legislation.

Parkington has thought of extending the idea to include CDs of other South African rock art regions; from the Drakensberg to the Brandberg, the Karoo and the Matopos.

But this is a far larger project that will need some big funding.

The book and the CD each sell for R75 and are available from Parkington.