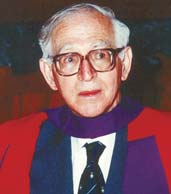 Rosalind Franklin's work at King's College was "absolutely critical" to the discovery of the DNA double helix, says UCT alumnus and Nobel laureate, Sir Aaron Klug. He spoke to Megan Morris in an exclusive interview from the United Kingdom.

As the world toasts the moment 50 years ago when Francis Crick and Jim Watson burst into a pub near Cambridge University and announced to all and sundry that they had discovered the very secret of life, or, more specifically, the double-helical structure of an elongated molecule known as DNA, reflection has time and again recalled the name of crystallographer Rosalind Franklin and a record of her telling contribution to the momentous broadcast.

For most of the period after 1953, Crick and Watson (together with Franklin's colleague at London's King's College, Maurice Wilkins), would monopolise the acclaim, and in 1962, nine years after their discovery, they were laurelled with the ultimate accolade, the Nobel Prize. Dubbed the "dark lady of DNA" (a phrase apparently coined in part by Wilkins in a letter to the other two laureates sometime in 1953), Franklin, who had died of ovarian cancer in 1958, would not share in the honour.

Some hold that this is because the Nobel Prize cannot be awarded posthumously, while others doubt whether she would have been named anyway. Nobel apart, biographers have since been arguing that Franklin has not been given due recognition for her work on DNA.

At the time of her move to King's College in 1951, deoxyribonucleic acid (discovered in 1869 by Swiss Johann Friedrich Miescher), was well known as the exclusive bearer of genetic material, and that it stored and passed on from generation to generation all the information necessary to create a living being. It was not known, however, what it looked like, or how it managed to fulfil this hereditary function.

At King's, Franklin joined Wilkins, who had been trying to produce pictures of DNA through X-ray crystallography, a new technique using X-ray diffraction to determine the three-dimensional structure of compounds. Two years later, using the same method, Franklin would come up with images that would be hailed as "among the most beautiful X-ray photographs of any substance ever taken".

These photographs and other data would make their way, via seminars and Wilkins, to Cambridge to Crick and Watson, who were rushing to determine DNA's structure ahead of other scientists closing in on the same target. Franklin's images and information would be pivotal in the model the two were building.

That same year (1953), Franklin terminated her unhappy stay (clashes with Wilkins and Watson, men-only dining rooms, etc) at King's College, and settled at London University's Birkbeck College where she began work on producing X-ray photographs of tobacco mosaic virus. In early 1954, she was joined in her efforts by the young Aaron Klug (later Sir Aaron Klug), the UCT alumnus and lecturer who in 1982 won the Nobel Prize in Chemistry, and who in 1983 was awarded the UCT Gold Medal of Merit.

In the four or so years (up to her death) that he would work with her, Franklin never mentioned her discord-laden time at King's College, noted Klug in a telephone conversation with MONDAY PAPER, calling from the MRC Laboratory of Molecular Biology in Cambridge where he is based. "She never complained or whinged - she just got on with her work," he said.

One recent Time magazine article argued that Crick and Watson reached the milestone first, simply because they could play ideas off each other, while Franklin, at King's College, had no such ally. Klug, added Time, became "the Crick to her Watson".

Not quite, commented Klug (who would actually publish a paper with Crick in the late 1950s on diffraction by helical structures). "We weren't exactly soulmates - the thing is, I was more of a theoretician than she was, and so I could do some of the mathematical analysis that was important to the study [on tobacco mosaic virus].

"Our gifts were rather different - she was an absolutely superb experimentalist with good analytical powers, but she wasn't a very strong theoretician."

And while she had been portrayed (in Watson's 1968 book, The Double Helix, for instance) as occasionally belligerent during her time at King's, Klug found no such character flaws. "I had no difficulty in getting on with her," he recalled.

"The trouble she had at King's stemmed from something quite different, because when she went there to work on DNA, the demarcation of the work wasn't well described. She thought she'd been given the DNA work for herself, and Wilkins thought she was his assistant.

"It was a misunderstanding from the very beginning."

Franklin's work at King's was "absolutely crucial" to the discovery of the DNA double helix, however, noted Klug. And, had she not, for example, "unwisely" ignored some valuable advice from Crick (about one of the two DNA forms she was working on) and missed a few important clues in her own findings (Crick was sharp enough to pick up on them), she may even have beaten Crick and Watson to the post, he added.

"If Crick and Watson had not intervened, she almost certainly would have worked [the structure] out in due course. And also, she didn't quite understand that there was a competition going on."

Recognition for Franklin's work is on the increase, however. Last year, the United Kingdom's Trade and Industry secretariat established a Franklin Medal in her honour to raise the profile of other women scientists.

In 2000, King's College also christened its new life sciences building the Franklin-Wilkins Building in acknowledgement of her part in the finding.

But the question that still hangs over the 50th anniversary celebrations is whether Franklin, had she lived, would have shared in the 1962 Nobel? A difficult one to call, according to Klug (who had cited both Franklin's inspiration and input in his 1982 Nobel lecture).

One of the obstacles was the fact that any one Nobel Prize can only be shared by a maximum of three people. "I think she would have had a strong claim to the award, but the Nobel committee would have had to decide between her and Wilkins," said Klug.

"But Wilkins started the work, and afterwards his lab worked out the X-ray crystallography in detail to confirm the Watson-Crick model. It would have been a very difficult choice for the Nobel committee."