Learners come to UCT in numbers 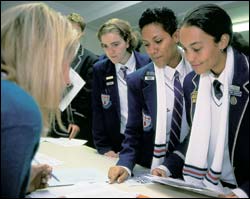 Adding up: Megan van der Scholtz (left) and Catherine Hager, grade 12 learners at Bergvliet High School, were among the thousands of participants at this year's UCT Mathematics Competition.

The annual UCT Mathematics Competition again proved to be a major drawcard on May 5, attracting thousands of learners to what may be the biggest contest of its kind to be held in one place at one time.

This year's competition saw some 5 676 participants from 130 Western Cape high schools make their way, entourages in their wake, to the UCT Upper Campus. Learners came from as far afield as Worcester, Hermanus and even Beaufort West.

And the cast of thousands could well have helped UCT set new standards for such an event, according to Professor John Webb of the UCT Department of Mathematics. "Though there are much larger competitions in other parts of the world, the UCT Mathematics Competition claims to be the biggest in the world to be held in one place and at one time," he noted.

Writing in 54 different venues across the Upper Campus, participants (grades eight to 10) competed at five levels, Webb explained. They did so either in teams of two or individually.

More than 180 teachers had volunteered to supervise the writing of papers at this year's event. These papers will be computer-marked, and the results announced at a prize-giving ceremony on July 12, to be held in the Baxter Concert Hall.

The competition was started in 1977 by two local maths teachers, Mona Leeuwenburg (Diocesan College) and Shirley Fitton (Westerford High), reported Webb. It has been held on the UCT Campus every year since 1980.

The competition is supported by Billiton, and prizes are donated by Casio and Oxford University Press. "The impact of the UCT Mathematics Competition is not confined to the activity of taking part on May 5," commented Webb. "Many schools train their teams intensely in the weeks before the event.

"Afterwards, the novel and challenging problems provide materials for many stimulating classrooms discussions."

In addition, the top performers are invited to take part in other maths competitions, including the Interprovincial Mathematics Olympiad (held in September each year), and the International Mathematical Olympiad Talent Search.