Some UCT perspectives on the double helix discovery 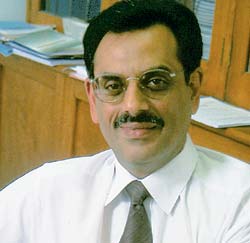 Prof Iqbal Parker on the next era.

It was as a young student under the tutorship of Emeritus Professor Claus von Holt, a former head of the department of biochemisty, that Professor Iqbal Parker of teh IIDMM was faced with an important decision in 1976: to study DNA per se or pursue research into the chromatids and histones bound up in the DNA?

Today, Parker smiles wryly when he considers those times. "Von Holt tried to convince me to study chromatids and histones, the proteins that package DNA. But I was more interested in DNA itself. Recombinant DNA technology was new. I thought chromatids and histones were pretty boring!" he quipped. "But today this is a major area of research on the DNA front and since 1953 there has been a logarithmic increase in our knowledge in this area."

Significantly, Parker was born in 1954, a year after James Watson and Francis Crick made their momentous discovery; that DNA consisted of a twisted double helix structure.

With the recent publication of the full sequence of the human genome, Parker asks a vital question: where do we go from here? "I believe the post-genomic era will hold the big challenges. It's now clear that these 'boring' proteins play active roles in dictating how the various genes are activated." This has heralded what Parker describes as the "omics" fields; burgeoning areas of science and research such as proteomics, where elaborate instrumentation allows structural biologists and others to analyse vital cell proteins and protein patterns.

"There is no doubt that new discoveries in the proteomics field will augment our current work in genomics. Our understanding of DNA has opened up whole new fields in the epidemiology of disease, providing new information on what causes mutations."

DNA teaches a lot about behaviour 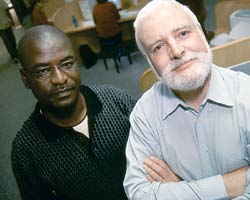 Creativity in the workplace: Prof Peter Underwood (right) has been using a video on the discovery of the structure of DNA to teach students, such as Lazarus Matizirofa (left), a few things about organisational behaviour.

The connection does not initially seem obvious, but for the past 10 years UCT Professor of Librarianship, Peter Underwood, has very successfully been teaching his students about organisational behaviour using the pursuit of the DNA structure as his reference point.

Based in the Centre for Information Literacy (CIL), from where UCT's programme in information and library studies is taught, Underwood annually catches his class off guard during a lecture session when, instead of handing out notes, he screens Life Story, a 1987 BBC Horizon docudrama that recounts the months and days leading up to the discovery of the DNA structure by James Watson and Francis Crick in 1953.

"When I first tell them that I'll be showing them a video about the structure of DNA, the students all look at me a bit open-mouthed," he reported.

But the award-winning feature certainly provides plenty of food for thought, said Underwood, who first viewed Life Story (the Americans preferred the more dramatic moniker, The race for the double helix) on its premiere screening on April 27, 1987, while teaching a similar course on organisational behaviour at the University of Wales, Aberystwyth. "I was transfixed," he said.

So, for example, there is the conflict between the creative pairing of Crick and Watson at Cambridge University, and the independent and punctilious Rosalind Franklin (who was not to share in their 1962 Nobel Prize in Medicine - see front page article) at King's College London. Also of note is the strained relationship between Franklin (despite the film's sympathetic portrayal of her position in a chauvinistic academic environment) and Maurice Wilkins, her King's colleague who would be named as co-laureate alongside Crick and Watson.

Driving the film, however, is the matching of the Cambridge pair, who are seen on regular jaunts around the campus bouncing ideas off each other.

"They clearly sparked as soon as they met," said Underwood.

The drama also does not gloss over the occasionally embarrassing scientific blunders that marked Crick and Watson's way to their historic discovery.

"They were very undisciplined, but that in fact was part of their creative process," noted Underwood. "And so the film imposed upon me the great importance for creating space where you can talk and where there can be a certain degree of serendipity."

According to Underwood, the film piqued his initial interest by the way it tackled a range of questions of interest to the study of organisational behaviour, such as issues of leadership, creativity and personal motivation. And his students have certainly responded well to the account, he pointed out. "The last two times that I've used it, they've come back asking for re-screenings."

Chromatin and histones - the next level of the DNA story 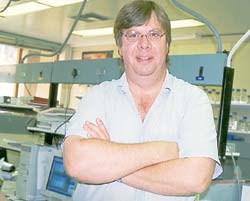 Associate Professor Hugh Patterton's laboratory in the Department of Molecular and Cell Biology is conducting what the IIDMM's interim director, Professor Wieland Gevers, refers to as the "next level of the story" as far as DNA is concerned.

This deals with the structure of nucleosomes, rolled up bits of DNA, and special proteins called histones, which appear as beaded chains in the chromosomes within the nucleus.

"Patterton did his PhD under Emeritus Professor Claus von Holt, who, with Deneys van der Westhuyzen and others in the 1970s, found ways of preparing the functional histone proteins, which allowed the determination of the structure of nucleosomes elsewhere," Gevers wrote.

It was an achievement highlighted by many flattering references in the standard Scientific American article on nucleosomes.

The formation of nucleosomes plays a vital role in making the DNA sufficiently compact to fit in the cell nucleus. In order to fit 46 DNA molecules (in humans) totalling over 1m in length into a nucleus that may only be 10 micrometres across, requires extensive folding and compaction.

The linker histone H1 is indispensable in this series of condensations, which results in a 10 000-fold lengthwise compaction of the genetic molecule, enabling the DNA to fit into the cell nucleus. More specifically, Patterton's research focuses on the role of histone H1 in regulating gene expression in baker's yeast (Saccharoyces cerevisiae).

Chromatin, the nuclear material that contains the genetic code, is an extremely topical and important area of study as it has a well-established repressive effect on the biochemistry of DNA. "It can mask the molecule from enzymatic and regulatory complexes that require access to the DNA for normal genetic functioning."

The repressive effect of chromatin has been associated with X-chromosome inactivation, recombination, DNA replication and transcriptional regulation.

"The regulatory role of chromatin has been clearly demonstrated in several human genetic diseases, including myotonic dystrophy (an inherited disorder in which the muscles contract but have decreasing power to relax), leukaemogenesis and multiple myeloma (cancer of the bone marrow), in which improper chromatin structural transitions and nucleosome associations have been implicated." 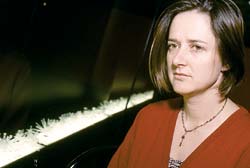 Dr Fritha Langerman with her reconstruction of DNA.

Lexicons & Labyrinths - the iconology of the genome is a Human Sciences Research Council sponsored exhibition currently on at the South African Museum. It seeks to explore new kinds of collaboration between art and science and allows artistic commentary on the human genome initiative.

Showcasing the work of eight national artists, including Michaelis School of Fine Art lecturers Fritha Langerman and Professor Malcolm Payne, as well as part-time lecturers Lien Botha and Nadja Daehnke, the exhibition performs an educational role in making many facets of the Africa Human Genome Initiative accessible to local audiences as well as making interesting connections between art, science and representation.

Finding a visual analogy to describe the unseen and looking for equivalents in order to explain what cannot be efficiently described in words, Langerman has produced an eight metre long strip of illuminated objects made from pharmaceutical packaging.

Her work is concerned with the 50-year anniversary of Watson and Crick's DNA model. According to Langerman, analogy is a system that seeks similarity through difference and is a means of visualising the unseen or indescribable.

Langerman describes the use of analogy in describing the genome as partly an attempt to deal with the "analogy of the text" and the "semiotic relationship between the genetic code and its expression as image - how the body is signed by its text".

"The exhibition is about examining the iconography of the genome, how it has and may be constructed and what implications this may have in the future," said Langerman.