Malaria parasites: It's back to basics 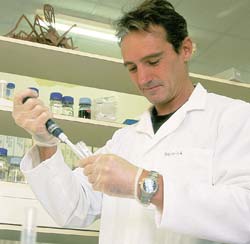 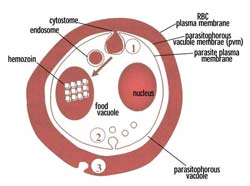 This visual shows the possible sites of endocytosis in the parasitised red blood cell.
(Visual courtesy of Dr Heinrich Hoppe.)

Although the past two decades have seen significant progress in the development of malaria vaccines and the characterisation and introduction of anti-malaria drugs, the scientific community's understanding of the fundamental cell biology of malaria parasites remains disappointingly sparse, contends Dr Heinrich Hoppe, a specialist in molecular parasitology.

While the humble cell presents a good springboard for plotting news ways of eradicating the parasite in its human host, work in this area has not been easy. Technical difficulties have been encountered in applying standard molecular and cell biology techniques and approaches to the malaria parasite. "Although we can grow the malaria parasites quite easily in the laboratory, manipulating these experimentally is very hard compared to other parasites, such as Toxoplasma, Trypanosoma and Leishmania," Hoppe explained. But with the recent completion of the malaria genome sequencing project and the introduction of techniques to genetically manipulate the parasites, cell biologists like Hoppe have new skills to add to their arsenal.

Though some early successes have been achieved (more on this), malaria genetic manipulation techniques remain difficult and there are few laboratories in the world with the capacity to undertake this kind of work. One of Hoppe's aspirations is to boost local expertise in this area by establishing a parasite cell biology programme that can compete internationally.

Having secured funds from several large institutions, including the Wellcome Trust in the UK, the MRC and the National Institutes of Health (NIH) in the US, Hoppe has gone back to basics in his malaria research, looking at how the parasite's life cycle can be arrested after it enters the red blood cells.

Once the infected mosquito has injected the malaria parasite (Plasmodium falciparum) into the bloodstream, it finds its way to the liver where it multiplies and divides. During this period the victim is asymptomatic, becoming ill only once the parasites re-emerge and invade red blood cells. There's a good reason the parasites choose to live inside these vital cells: here they are hidden from the immune system.

Safely inside, the parasite grows and multiplies to form dozens of little parasites. When the red blood cells burst, these are released to invade new red blood cells, causing one of the main symptoms of malaria: anaemia due to blood loss.

"The parasite also eats the red blood cells from the inside, taking up the red blood cell cytoplasm or components and digesting these for its own nutritional purposes," Hoppe explained. "This uptake process is known as endocytosis."

Endocytosis is a fundamental process in all cells which allows them to take up macro-molecules and fluids from the outside environment. During the procedure, the membrane of the cell invaginates and then "pinches off", forming little vesicles (endosomes) containing their nutritional haul. Each vesicle delivers its contents to a specialised compartment in the cell, known as a lysosome or food vacuole. "This is where the endocytosed material is degraded and digested as nutrients for the cell," Hoppe added. "If you can block this process of endocytosis you will literally starve the parasite to death." There are several questions he hopes his research will answer: Where does entocytosis occur in the parasitised red blood cell? What is the molecular mechanism of invagination at the plasma membrane? How is the endocytic pathway in the parasite organised? Where the latter is concerned, three of the most important anti-malarial drugs, chloroquine, mefloquine and artemisinin, are believed to play a pivotal role in blocking the formation of hemozoin, a crystal structure that safely "parcels up" the toxic heme residue remaining after the haemoglobin in the red blood cells has been degraded in the food vacuole.

"We have found by electron and fluorescent microscopy that chloroquine blocks the fusion of parasite endosomes to the food vacuole, resulting in the accumulation of large numbers of endosomes containing undigested haemoglobin," Hoppe explained. "An alternative interpretation of the chloroquine action is that the parasite simply starves to death as the endocytosed material can't be delivered to the food vacuole. Interestingly, mefloquine and artemisinin seem to block endocytosis completely. We're currently developing quantitative assays to determine the extent of endosome-vacuole fusion following drug treatment."

The five-year project only recently got off the ground (November last year) and Hoppe counts himself fortunate to have secured the financial means to fuel what he terms "very basic and fundamental" research. "It's hard to predict that my work will lead to a new strategy for combating malaria, but that's the nature of basic research. Nonetheless, it's gratifying to see agents out there who are still willing to fund basic knowledge gathering research as opposed to more directed research."

(Hoppe is a Wellcome Trust International Senior Research Fellow at the Institute of Infectious Disease and Molecular Medicine at UCT).