Travel bursaries to London up for grabs 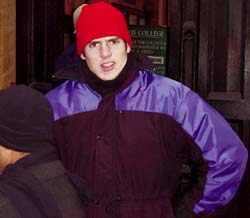 Steve Bradshaw, currently in his fourth year of business science, spent the December vacation savouring the sights and sounds of London while representing UCT on the prestigious Abe Bailey Travel Bursary.

The Bursary was established in 1951 and has since sent over 500 students and junior lecturers to the United Kingdom. It aims to promote understanding and joint initiatives between young South African leaders, irrespective of race or gender. Each year 16 students are selected to represent each of the top South African universities.

Bradshaw has been actively involved in a broad spectrum of activities at UCT. In 2002 he chaired both the UCT Sports Union and the Commerce Students' Council. He also served on the Mountain and Ski Club committee and the Smuts residence house committee. He is "passionate" about rock climbing, snowboarding, surfing and "having fun". Bradshaw graduates at the end of the year with with business science honors in finance with majors in economics, and information systems.

While in the UK, the bursars enjoyed a feast of political, educational, historical and "just plain recreational" activities. Highlights of the 2002 tour included visits to Cambridge, Oxford, Stratford-on-Avon and Edinburgh. The bursars participated in discussions at the Labour and Conservative party headquarters and attended the House of Commons where, incidentally, the legalisation of marijuana was being debated.

"I can't overemphasise what an amazing experience the trip was for me," Bradshaw enthused. "Until then I had only seen pictures of London."

Bradshaw has encouraged all UCT students to apply for the 2003 bursary. "It is an awesome thing to take part in. The Trust will be looking for students who are able to express themselves well and who have shown strong involvement at university."

The closing dates for applications is April 30. For more information, speak to Edwina Goliath, Student Development Services Department, tel 650 3924/5. Bradshaw will give a presentation to all interested candidates on April 23 during meridian in Leslie Social Sciences 2B.