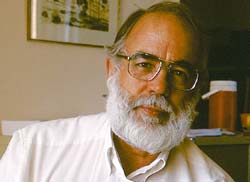 An eye on development: Prof Theo Stewart, recently elected Vice President of IFORS, is also developing the field of organisational research within UCT.

A fear of technocracy, inherited from a legacy of colonialism in developing countries, could hinder the implementation of sophisticated management tools such as operational research (or management science), in developing these nations, says the Department of Statistical Sciences' Professor Theo Stewart.

Stewart has been elected Vice President of the International Federation of Operational Research Societies (IFORS), which represents 25 000 to 30 000 members worldwide. He is taking the reins from Elise del Rosario of the University of the Philippines' National Computer Centre.

Operational research (OR) is the scientific approach to solving management problems by applying formal, often mathematical models. It is concerned with assisting and advising decision-makers in a wide variety of settings: in business, commerce, national and local government, and in service sectors such as health. For example, OR may be used to determine the most cost-effective use of limited resources such as people, machines, money and time. Using a combination of quantitative and qualitative information, the OR practitioner structures and builds formal models, which managers may use to understand consequences of potential actions and to find an optimal matching between goals and actions, thus leading to more informed decision making.

A chemical engineering graduate from UCT, Stewart first worked in industry and at the Council for Scientific and Industrial Research (including a stint as Director and Head of Operations Research and Statistics at the National Research Institute for Mathematical Sciences of the CSIR in Pretoria) before joining UCT in 1984. When he joined the University it was with the specific aim of developing operational research within the Department of Statistical Sciences, where OR has since been integrated into the standard statistical teaching. His particular areas of research interest are multi-criterion decision analysis, multi-objective mathematical programming, Bayesian statistics and applications of these methods in resource management and industrial planning.

A sophisticated management tool, OR is a little known field in South Africa and other developing countries. It thus augurs for these IFORS members that Stewart and his predecessor, Del Rosario, hail from developing countries, indicative of a strong development thrust within the organisation.

"The type of operational research within developing countries can be quite different, qualitatively, from that in developed countries," Stewart commented.

"In the developing world there is a fear of technocracy; a worry that technological solutions will be imposed on these populations by developed nations. In many cases this scepticism is a result of a heritage of colonialism," he noted. "But many involved in the participation may lack high level skills of formal education."

Though his task as VP of IFORS will increase his administrative load - and occasional air travel to meetings and conferences - Stewart is keen to put OR squarely on the map at UCT. He is currently developing a proposal for an MSc programme in Operational Research in Development for the Department of Statistical Sciences, to be tabled for faculty approval later this year, aiming at a launch in 2005.