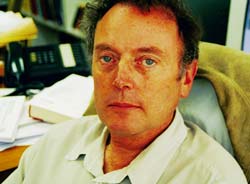 "In the real world the United Nations (UN) is a myth rather than a reality. It does not exist as a coherent player in global politics, rather it is a forum where states exercise their national interests," stated Professor Robert Schrire, lecturer in the Department of Politics at UCT.

According to Schrire there was a hope after the cold war that the UN would develop as the conscious of the world and that from that global communities dominated by human rights and good governance would prevail. "That has not happened and the reason that it has not happened is not because the United States is the villain," he explained. "It is because most systems dominated by one state will not develop a communal sense of identity. In other words it does not matter which super power there is, the very existence of a super power means that, that state has no incentive to co-operate."

While many people see this as a setback, Schrire said it is in fact it an eye opener into the reality of the power dynamics in the world. "The UN can only develop into a true peace keeping organisation when the world has already reached of stage of harmony."

Schrire was recently featured on the SAFM morning current affairs show, AM Live, were he and host John Perlmen, discussed the global security implications of the current war in Iraq, and the countries that will most feel the impact of this war.

Schrire's comments come at a pivotal time in global politics and America's controversial unilateral war on Iraq. Schrire said that in the future the US would pay a very heavy price for its unilateral action. "That price is going to be that the rest of the world will not accept American dominance as they have before. Countries like Russia and China, and to a lesser extent Germany and France, were not unduly concerned with America's position, because America was a relatively benign superpower.

"Now what we are going to see," he continued, "is that countries like Russia and China will begin to view the US as a threat or potential threat. So we are going to see a return to power competitions where these dominant roles are under threat."

In Schrire's view, if this scenario takes place then an insecure Israel may seek to go it alone in the face of Western pressures, while states like Pakistan and North Korea would take similar action by forging links with terrorist groups and increasing their weapons of mass destruction.

Schrire added that he anticipates that the American government would come to realise that the problems of instability in oil producing countries are very much related to Israel. "You cannot divorce those issues from the Israeli-Palestine issue. What we are going to see is that there is going to be considerable pressure placed on Israel by the US and the UN to basically accept a two state solution with a genuine Palestinian capability, this result may lead to the alienation Israel from US and the European Union."