Viruses are birds of a feather 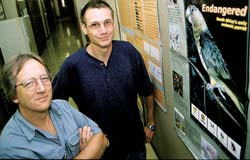 For the birds: Prof Ed Rybicki and doctoral researcher Livio Heath of the Department of Molecular and Cell Biology are part of a national consortium trying to develop a vaccine against Psittacine beak and feather disease (PBFD).

THREE UCT researchers are contributing their experiences in virology to a national consortium that hopes to produce a vaccine against psittacine beak and feather disease (PBFD), sometimes billed as the parrot version of HIV/AIDS.

PBFD is caused by the beak and feather disease circovirus (BFDV), which infects and kills off the white blood cells of parrots. In addition to the initial lethargy and loss of appetite, the parrots lose their feathers and, in severe cases among young parrots, their beaks.

A highly contagious and debilitating disease, it affects both wild and captive populations of psittacine birds. It is difficult to quarantine, and there is no known cure.

In clinical terms, the PBFD virus in many ways resembles HIV, explained Livio Heath, a doctoral student in the Department of Molecular and Cell Biology who began his PhD working on the development of an HIV vaccine. â€œIt's very similar to AIDS in that it affects the immune system of the birds,â€ he said. As with HIV/AIDS, the many parrots that die succumb to secondary infections.

Heath and his supervisors, Professor Ed Rybicki and Associate Professor Anna-Lise Williamson (the latter of the Division of Medical Virology in the Department of Clinical Laboratory Sciences), have over the past few months been laying the groundwork for the development of a vaccine suited to captive psittacine birds. As such, they have already expressed the protein that they believe will yield the best vaccine.

Should the group succeed in developing a vaccine, it will be the only one available in the world. While Australian researchers have produced a killed-virus vaccine — in which the infectious virus is isolated and then deactivated — it is not commercially available.

One of the problems with a killed-virus vaccine is that if it is not properly inactivated, it could infect non-disease carrying parrots, noted Heath.

What the UCT team is trying to do instead is produce a sub-unit vaccine, comprised of only non-infectious parts of the virus. â€œSo there's no threat of infection, which is a huge bonus in any vaccine,â€ Heath added.

In addition, the team will also attempt to produce a therapeutic vaccine for use in parrots already infected. Both vaccines would hopefully also be adapted for wild parrots.

The UCT team has been collaborating closely with other members of the consortium, which also includes Associate Professor Rob Bragg of the University of the Free State, veterinarian Chris Kingsley, breeder Ben Minnaar and Dr Michelle Mulder of Idea to Industry CC (or I2I).

The consortium has been focusing much of its attention on the endangered Cape Parrot, the only parrot endemic to South Africa and found predominantly in the Eastern Cape. It also happens to be under some threat from the disease, both in aviaries and in the wild. â€œSo there's an immediate conservation angle if we come up with a vaccine,â€ observed Rybicki, â€œin that we can help save the Cape Parrot, for a start.â€

The consortium received a financial fillip recently when it was announced that it would be awarded a grant of R4.3-million over the next two years by the Johannesburg-based Biotechnology Partnerships and Development (BIOPAD) Centre.

BIOPAD is one of South Africa's three Biotechnology Regional Innovation Centres established under the auspices of the Department of Science and Technology (DST) and will act as a nucleus for biotechnology research in animal health, industry, mining and the environment.

R1-million of the grant will be for the UCT part of the project, which was originally funded by Williamson. The rest will be divided among the other consortium partners.

Developing a vaccine could hold significant financial rewards for the group, indicated Rybicki. â€œIt's not a particularly big industry, but it is a high-value one,â€ he said.

When first approached by Kingsley to come up with a vaccine to counter the effects of PBFD, Rybicki took up the challenge because of his — and the department's — extensive expertise in virology, despite the fact that an avian ailment represented a new area of research for the Department.

â€œIt turned out that the kind of virus we're dealing with is very similar to what I've been working with for the past 15 years in plants,â€ he commented.

â€œSo we have a large amount of experience in dealing with and engineering this kind of virus. This was just more of the same thing, and it didn't matter that we were dealing with a bird instead of a maize plant.