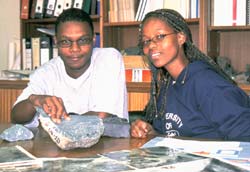 Vukani Mbatha (left), a geosciences honours student, and Ndawedapo Mbangula, a third-year student, are both very positive about the Department's academic support programme.

AN ACADEMIC support and mentoring programme for students in the Department of Geological Sciences has had tremendous success in graduating a growing number of world-class black and female geologists since the early '90s.

The Earth Science Academic Support Programme, set up in 1989, has also given rise to a departmental outreach programme, "Geoteach", initiated to create geological sciences awareness among learners and teachers from historically disadvantaged backgrounds.

Professor Anton le Roex, head of Geological Sciences, is extremely proud of the progress made with regard to transformation and student equity in his department.

â€œThe continued growth in black and female graduates, as well as the annual student intake, is definitely attributed to the wonderful work that Dr Marian Tredoux, the head of both programmes, is doing," he said.

"She provides a range of support structures, from academic mentoring to life-skills training. Her input and dedication is overwhelming.

â€œI believe another reason for our success is that we endeavour to create a welcoming and positive environment where all students, even those from the most remote areas of South Africa, can feel comfortable. We don't treat our students from historically disadvantaged backgrounds differently and we don't alienate them, â€ he added.

Le Roex noted that Professor Maarten de Wit was instrumental in establishing the programme in 1989. With the support of industry partners, they have been able to sustain the programme and subsequently graduate competent and qualified students into the mining and exploration industry. This industry initially supported Tredoux's post, but it has now been taken over by CHED.

According to Le Roex the geosciences field is not generally seen to be very attractive and over the years classes at most South African universities have been relatively small.

â€œWith the outreach programme for teachers and learners, Marian oversees a group of students that conducts numerous field trips and other projects to introduce them to the world of geoscience. Thanks to this initiative to expose learners to geosciences, we have been fortunate in annually attracting a number of students into geology who might otherwise have been unaware of the degree programme and what a career in geology offered,â€ he added.

Monday Paper spoke to two black students to determine their take on the value of the academic support and mentoring programme.

Ndawedapo Mbangula, a third-year student, is very positive about the programme. â€œI enjoyed the small group discussions. It was extremely helpful. The staff and lecturers are very supportive and it becomes easier to be open and free in such an environment,â€ she said.

Vukani Mbatha, an honours student, noted that he initially found the environment quite challenging, as he didn't have that many people to relate to. â€œBut once you let go of your initial perceptions and get into the workload, it become less of a challenge,â€ he noted.

Despite the growth in the black student profile of geosciences at undergraduate and honours levels, the Department is concerned about the low percentage of black students at masters and doctorate levels.

â€œWe are engaged in discussions with our partners in industry to encourage students to return and obtain these post-graduate qualifications. Ultimately, the partnership between industry and tertiary institutions is crucial for transformation and growth,â€ said Le Roex.