General
The 2nd South African WebCT Users Conference will take place in Stellenbosch in late-2003. Further details will be provided when available.

Q&A:
Q: When did UCT start using WebCT, and how many people at UCT are using it now?

A: After three pilots in 2000, WebCT went live in 2001. By the end of 2002, some 150 lecturers and 3Â 500 students were using WebCT in over 150 courses. More details on current usage are at: http://webedu.its.uct.ac.za/stats/default.html and http://healthed.med.uct.ac.za/webstats/webct/default.html. 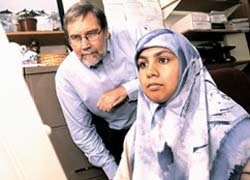 Linking law: Prof Danie Visser (left), with the assistance of secretary Khadija Khan, has been using WebCT for a number of projects in the Department of Private Law.

Spotlight On: Prof Danie Visser
Prof Danie Visser of the Department of Private Law in the Faculty of Law (having been trained and assisted in its use by his highly computer-literate secretary, Khadija Khan) uses WebCT in a variety of ways, illustrating the flexibility of WebCT and innovation of our staff. So, whether supporting larger courses, post-graduate special short courses, or collaborative initiatives among professionals, WebCT's flexibility and power is there for the taking.