AT THE time of going to press, war had just begun in Iraq. Leaving aside all the humanitarian and political issues, there are bird concerns as well, said Professor Les Underhill, Director of UCT's Avian Demography Unit.

â€œThe bird conservation issues have a large South African component. War in Iraq has a major potential to impact bird migration between South Africa and Asia,â€ he added.

A search of the database at SAFRING (South African Bird Ringing Unit) showed that there were two examples of birds ringed in South Africa and recovered in Iraq.

One is a Steppe Buzzard, ringed by Peter Steyn on November 16, 1968, near Bredasdorp, not far from the southern tip of Africa. Steyn was one of the founder members of the Cape Bird Club, and is now its President, Underhill noted. â€œThis bird was shot five months and seven days later in Iraq, on April 23, 1969. It would have been on its way to its breeding grounds in southern Asia.â€

The other is a Curlew Sandpiper, ringed by Manfred Waltner, on February 17, 1974, at Langebaan Lagoon. According to Underhill, Waltner was the leader of the Western Cape Wader Study Group, and still participates in the biannual counts of the waders at Langebaan Lagoon.

This bird was recovered dead (cause of death unknown) at Sawa Lake in Iraq two months and fifteen days after ringing on May 4, 1974. It would also have been on migration, about halfway to its breeding grounds, which lie in the northernmost edge of the Taimyr Peninsula, in the tundra of Siberia.

These two recoveries are representative of millions of birds that migrate through Iraq in particular and the Middle East in general, Underhill added.

â€œThe SAFRING database contains hundreds more recoveries of birds ringed in South Africa, and recovered in this general area. These migrants fly north in April and May to breeding grounds covering the vast area of Asia north of the Himalayas, and south to non-breeding grounds in Africa from August to October. The species which breed farthest east in Russia and migrate to Africa are the Ruff and the Willow Warbler, which breed as far as the Bering Strait, which separates Russia from Alaska.â€

â€œOne of the main battlegrounds of the Iran–Iraq War was the Mesopotamian marshes, one of the most important bird areas of the Middle East. Vast areas of reedbeds were burnt and wetlands were drained. Subsequent to the Gulf War, vast areas of what was left were drained. Some 90% of this 15 000 km2 wetland has been ruined, equivalent to an area two-thirds of the size of the Kruger National Park.â€

During the Gulf War, the world's largest oil spill ever also obliterated millions of hectares of mudflats in the Persian Gulf. The destruction of this fragile ecosystem was total, Underhill said.

â€œThese wetlands and mudflats are critically important stop over and refuelling sites for virtually all species of birds on migration through the region. Most of the Middle East is pretty arid, and a lot of it is simply inhospitable desert. The scattered patches which are not desert represent the most productive areas, and hence become both the feeding grounds for the migrating birds and the battle grounds for the armies.â€

Underhill maintains that the picture of migration that we should have in our minds is not a continuous route along which birds can feed anywhere that takes their fancy. Rather, the picture should be a series of stepping stones which are linked by â€œhopsâ€ of varying lengths.

â€œWe might get away with destroying a few of these stepping stones. But ultimately, the gaps between them get too large, and the destruction of one critical refuelling site leads to the loss of a migration route, and the loss of a population breeding in one area of the world and migrating to another.

â€œSo, while the war in Iraq might seem a long way away for most of us in South Africa, the birds we see on our next club outing might become the victims of the habitat destruction caused by war. The concept of 'bushbirds' takes on a whole new meaning.â€ 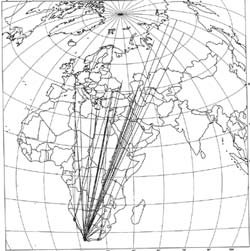