Oceanographic research is a cruise 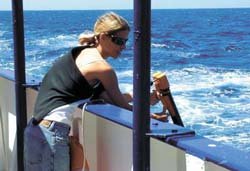 Over the top: Jenny Veitch, an MSc student (oceanography,) launches an expendi-bathythermograph (XBT) into the ocean from the side of the research cruise ship, the Meteor. (Photo: Michael Machutchon.)

UCT's Ocean Climatology Research Group of UCT recently took part in a marine geological cruise above the shelf and the upper continental margin on the west coast of South Africa aboard the German research vessel, the Meteor.

Leading the cruise was the University of Bremen's Dr Ralph Schneider, one of more than 20 scientists aboard, a group comprising marine geologists, geochemists, geophysicists and paleobiologists from Bremen and Barcelona Universities.

According to Veitch, the main scientific aim was to decipher the Late Quarternary climate history of the southern Benguela and to investigate the influence of warm Agulhas Current water entrainment into the south east Atlantic.

â€œAlso of interest were variations in intermediate and deep-water masses during the Late Quarternary, which ultimately affect the diversity and distribution of microfossil species in the south Atlantic basin,â€ she added.

Sediment cores were extracted at several sites along four cross-shelf transects and another that ran along the Holocene mudbelt, parallel to the coast.

â€œAlthough primarily a marine geology cruise, paleo-oceanography was a major focus and the physical oceanographic support on board was advantageous to the geological investigations,â€ Veitch noted.

Prior to the cruise, the group used satellite remote sensing tools to locate Agulhas rings, cyclones and other features that would be of interest during the cruise.

â€œTo further validate and explore the existence of such mesoscale features, we deployed 60 expedi-bathythermographs (XBTs) (see photo) between the geological stations on all transects other than the shallow mudbelt transect along the coast,â€ Veitch explained.

The temperature profiles obtained from the XBTs not only revealed the extent and hydrographic properties of Agulhas Current interaction in the south east Atlantic but also aided investigations into the thermocline structure and the identification of water masses in the area.

â€œAt most of the geological stations we lowered a Current Temperature Depth (CTD) probe, also equipped with an oxygen and fluorescence probe, to the sea floor. The data obtained from this instrument proved invaluable, as it allowed for a more detailed analysis of the water masses and mesoscale features in the southern Benguela.â€