Geologist on the Roof of the World 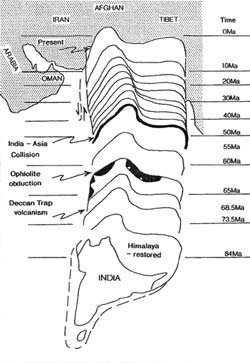 Progressive movement over the last 84 million years (Ma) of the Indian subcontinent. Previously, India was part of the supercontinent Gondwana, from which it separated some 160 million years ago, leaving East Africa and Madagascar in its wake. The paleo-positions of India over the last 84 million years are calculated from magnetic data preserved in the rock records of India and the Indian Ocean. This data allows scientists to model the uplift history of the Himalayas after India collided with the Asian mainland. Scientists must then compare their model calculations to the real geological observations that geologists like Dr Mike Searle painstakingly collect during their fieldwork. Interestingly, often the theoretical models do not precisely fit the field data, and are therefore in need of periodic modification, since the models must fit the rock record. Thus, without the sort of work carried out by Searle, our understanding of how our Earth work, remains incomplete.

They provide a succinct introduction to an unusual academic, a man De Wit describes as â€œMister Himalayasâ€, a geologist-cum-rock climber who has scaled some of the toughest slopes in search of the origin of the Earth's highest mountains.

Searle is the NERC Senior Research Fellow at Oxford's Department of Earth Sciences and has been visiting UCT as the Louis Murray Fellow 2003.

This fellowship is named after one of South Africa's foremost mineral-exploration geologists, and a graduate of UCT, who was tragically killed in the Andes during geological investigations of this mountain belt. The fellowship is awarded every four years to a prominent earth scientist with a reputation as â€œthe best in the world in the fieldâ€, and is funded by De Beers.

Searle's academic schedule has included slide shows and lectures, covering his work in harsh terrains such as the desert of Oman and the ice-clad peaks of the Hindu Kush and Himalaya mountains across Pakistan, Tibet, Nepal, Butan and Burma.

â€œMike is 'Mister Himalayas' when it comes to the geology and evolution of this, the world's greatest chain of mountains,â€ De Wit added. Searle has worked in the Himalaya for over 25 years, climbed most of the peaks and recently completed a new geological map: The Mount Everest Region, Nepal, South Tibet, Himalaya.

Researchers view the geology of the Himalayas as highly complex as it reflects the continental collision of the Indian and the Eurasian Plates starting around 50 million years ago (see figure below) to create the world's highest mountains (nearly 9km above sea level) and high plateau of Tibet (about 5km high).

â€œThe Himalaya is an active mountain belt and the youngest range in the world,â€ Searle added. With Everest at 8 850m high, the Himalayas are still growing, rising by 10-20 mm a year (the average length fingernails grow). â€œThis is rapid growth when measured across millions of years.â€

One of Searle's other specialities is the study of ophiolites (from the Greek words ophis [snake] and lithos [rock]). These are remnants of ancient oceanic crust and mantle that have been preserved along the edges of continental plates where the Earth's mountain belts are found.

These old fragments provide the only information available to geologists about ancient oceans and how they were formed. Studying ophiolites has advanced our understanding of how the Earth recycles oceanic crust back, deep into its â€œbowelsâ€ (the earth's mantle, from which oceanic crust is generated in the first place). Ophiolites are found throughout the world: Alaska, Argentina, Chile, the Balkans, New Guinea, Japan, Taiwan and Oman, Tibet, Turkey and Newfoundland (the latter four regions studied by Searle); and also in South Africa.

Born in Singapore, Searle spent much of his boyhood in Oman where his father was part of a seismic exploration team in the Arabian Desert. He began rock climbing in Wales as a boy, learning skills that would prove unexpectedly invaluable to his profession one day.

â€œI couldn't have unravelled the geology of the Himalayas without the climbing skills,â€ he mused.

With over 25 expeditions to the area since 1984, the Himalayas represent familiar terrain. He has many tales of adventure: travels to the Pakistani Karakoram in 1985, to K2 (Chogo Ri), the world's second highest peak, a remote 14 days' walk from base camp; constructing emergency ice igloos in Chile. Methods of travel have offered interesting opportunities: sherpas and yaks in the Himalayas, dromedaries in India and porters and Jeeps in Pakistan.

Though the mountainous, cold regions have brought their own hardships, his work in these volatile regions is not without danger. While there was active fighting in Pakistan, Searle stumbled on a frontline base and was arrested as a suspected spy.

Though he has tramped some of the most inaccessible regions on earth, this is Searle's first visit to southern Africa. â€œLook at this,â€ he said, gesturing to the view from his temporary office in the Geological Sciences Building. It is the verdant backdrop of Devil's Peak, a vista created for a geologist-cum-climber.

One of Searle's interests is to test whether some geologic terrains of South Africa might once have been deeply buried beneath a mountain range such as the Himalayas. South African geologists, for example, have long speculated that the rocks exposed in the northern Limpopo province may represent the deep roots of 2 700 millon-year-old Himalayan-like mountains such as those that now occur some 40 km below Mount Everest.

Searle has one existing South African, and UCT, connection. One of his â€œbestâ€ PhD students was Peter Hildebrand (a UCT graduate, and honours student in 1993, and the only southern African geology student ever to have been awarded a Rhodes Scholarship) who researched the geologic evolution of the Western Karakoram-Hindu Kush mountain ranges in northern Pakistan.

With his stack of scenic and mountaineering slides, the UCT Mountain and Ski Club immediately snapped up Searle for a first-hand climbing perspective from the Roof of the World.

Though Searle has written copiously about his subject over the years, somewhere in all of this is a book, not an academic tome, but a richly illustrated travelogue detailing the unofficial adventures of a geologist in high places.