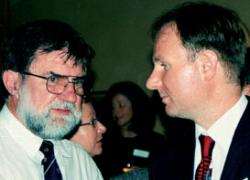 Heads together: Assoc Prof Peter Dunsby (right), programme convenor of the new postgraduate South African National Astrophysics and Space Science Programme (NASSP,) in conversation with Prof Tim Dunne (statistics) at the recent launch. This national, co-operative programme involves 13 other institutions and is being hosted at UCT.

A MONOPOLY on the southern skies has created an important niche for South African researchers in astrophysics and space science and this has been recognised by the introduction this year of two new postgraduate courses, an honours and a Masters, in these key fields.

The South African astronomy community has drawn together researchers from the region to launch the collaborative, combined degree programmes under the banner of the National Astrophysics and Space Science Programme (NASSP). Although these will be hosted at UCT, 13 other institutions are involved, including the Universities of the Free State, Potchefstroom, Zululand, Natal, Rhodes, the South African Astronomical Observatory and the Hartebeeshoek Radio Observatory.

Significantly, the programmes will enable students from Africa (and elsewhere) to gain internationally recognised postgraduate degrees under the tuition and mentorship of some of the country's leading scientists. At UCT these include Professors Jean Cleymans and Raoul Viollier (physics), Professor Tim Dunne (statistics) and Professor George Ellis and Associate Professor Peter Dunsby, the programme convenor (UCT Cosmology Group).

Sixteen students have registered for the honours programme and six for the Masters, with candidates from Uganda, Kenya, the Sudan and Zambia. In addition to lectures, honours students will take a practical component involving field trips to some of southern Africa's space science research facilities such as the High Energy Stereoscopic System (HESS) and the South African Large Telescope (SALT) at Sutherland.

The first six months of the Masters course offers a broad programme of 11 courses offered by South African scientists who are being flown in from participating NASSP institutions. This will expose students to a wide range of research opportunities in South Africa and around the world.

Astrophysics and cosmology, Dunsby notes, has come of age. â€œThere have been huge advances in observational techniques. Fibre optic technology, for example, allows astronomers to sample hundreds of galaxies a night. All of this has resulted in a huge explosion of data, which, for the first time, has enabled us to constrain cosmological models. Fifteen years ago we could only gauge the age of the universe to a factor of 2. Now we can come to within 5% and 10%. Everything is happening now.â€

â€œAstrophysics and space science is an international endeavour and if something interesting happens in the southern sky, we want to monitor it, continuously. SALT makes us increasingly competitive. It's important to have an international facility.â€

While Dunsby says South Africa has â€œgreat facultiesâ€ many of the current scientists, he adds, are heading for retirement in the next decade. â€œIn some instances, there is a huge gap between senior faculty and the junior members. The new programmes will ensure that new researchers are developed to fill the gaps in the future. To meet these targets we will have to produce between 60 and 100 PhDs in the next 10 years.â€

These graduates will join the growing community of African researchers who use the continent's â€œgiant eyesâ€ to explore the universe. For more information go to the NASSP website. 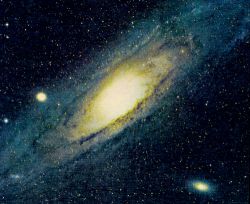