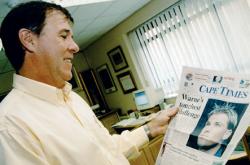 Loss of water and reputation: Prof Tim Noakes has kept an interested eye on Shane Warne's drug-induced eviction from the Cricket World Cup.

THE 2003 Cricket World Cup has over the past weeks been bedevilled by a number of off-the-pitch controversies, none more headline-grabbing than the announcement – and his subsequent whisking-away – that Australian match winner Shane Warne had tested positive for a banned diuretic.

According to Professor Tim Noakes, Director of the MRC/UCT Research Unit for Exercise Science and Sports Medicine (ESSM) at the Sports Science Institute of South Africa, the incident once again draws attention to one of the grey areas in sports medicine.

Diuretics, he explains, can be used to lose weight quickly as they enhance the output of urine (although the loss of fluids could lead to dehydration).

When used immediately before a sporting event (where being lighter on the day is advantageous, for example) it is considered by the rules regulating most international competitions to be a performance-enhancing drug, says Noakes. â€œBut in Warne's case, it clearly wasn't used as a performance enhancer as he wouldn't want to be dehydrated when he's out there playing cricket.â€

If not used for weight loss, however, there are three other reasons why traces of a diuretic might have been found in his urine, Noakes adds. Firstly, if he was suffering from either high blood pressure or heart failure – unlikely with a relatively young sportsman – a diuretic would be a legitimate medical treatment, and while he would still technically be guilty of an offence, there could be an argument for mitigating circumstances.

â€œThe second possibility – and it's unlikely, but not impossible – is that he ingested the diuretic as a contaminant of something else, for example a nutritional supplement,â€ posits Noakes. Nutritional supplements, however, are usually used to gain rather than lose weight, and are more likely to contain traces of anabolic steroids rather than diuretics, he notes.

â€œHowever, it might not be impossible that some weight-loss supplements might inconceivably be contaminated with traces of diuretics, and Warne had lost a great deal of weight this past yearâ€.

The third possibility – and this is the most popular theory doing the rounds, says Noakes – is that Warne used the diuretic to disguise or get rid of traces of some other drug. â€œIf this is the case, then the most likely scenario is that he was taking medication to make sure he recovered faster from his shoulder injury. But Warne has denied that this was a possibility.â€

Such medication would have been an anabolic steroid, which research has shown to be effective in speeding up the recovery from certain injuries. â€œA doctor in usual medical practice might well argue that if he did not give Warne steroids during his recovery from surgery, he was not treating him optimally,â€ observes Noakes.

â€œAnd in a sense that's one of the major ethical problems in sports medicine. It's a very fine line between using drugs to treat your patient for a medical condition, and when you're using them as performance-enhancing drugs.â€

Noakes stressed that, in reality, the ethical sports physician has no choice; performance-enhancing drugs and most especially anabolic steroids may simply not be prescribed to athletes regardless of these theoretical arguments, even if the real aim is to expedite recovery and not to enhance performance.

This is why the rules state clearly that if a sportsperson is found to have these products in his or her urine shortly before or during an event [Warne was tested a day before taking part in a match], then it's considered to be performance-enhancing, adds Noakes.

â€œTechnically, if he had been out for a year, and if he had been using steroids to treat an injury for the first month of that recovery process, then he would not have been tested and, I suspect, no-one would have complained even if the use had subsequently come to light for some other reason.â€

If Warne had been treated with anabolic steroids, then there may have been a miscalculation by those who expected that he would be tested at a later date, says Noakes.

â€œAny doctor who's involved in sport at a high level and who unethically prescribes performance-enhancing drugs to his or her athletes, knows exactly how long these drugs stay in the body, how much to give and for how long, and how to make sure that the athletes don't test positive.â€

But, emphasises Noakes, there is no evidence that Warne had in fact been taking steroids or, other than the offending diuretic, any other performance enhancing drug.

â€œThis is all speculation specifically since no traces of anabolic steroids have been reported in his urine tests,â€ he states.