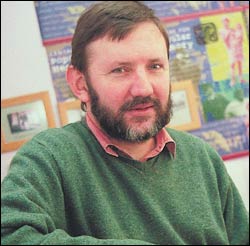 Keeping stories alive: Dr Sean Field and colleagues at UCT's Centre for Popular Memory treat their archives as a dynamic space for stories to stay alive and remain open to new interpretations.

Speaking at a major international conference, UCT oral historian Dr Sean Field pointed to the ongoing dispute around the kinds of 'memories' deemed worthy of chronicling, and the need for archives to democratise the dissemination of its treasures.

Field, director of the Centre for Popular Memory in the Department of Historical Studies, was delivering the keynote lecture at Audiovisual Archives: Memory and Society, the 2003 conference of the International Association of Sound and Audiovisual Archives (IASA). The meeting was hosted by the National Archives of South Africa and the SABC, and was held at the University of Pretoria at the end of September.

In his presentation entitled Memory, Knowledge and Power: Can Archives Keep People's Stories Alive?, Field argued that there exists a power struggle between the "forms of knowledge within and outside the archive". Much of the debate is about the social construction of memories, which includes, for example, what people remember, forget and silence about their past experiences of space, place, family, community, culture, politics and work, he explained.

Many historians, noted Field, view memories - regardless of the forms in which they are expressed (words, stories, pictures) - as unreliable and flawed. "It is commonly assumed within the academy that people's memories are merely unreliable and therefore not worthy of study, let alone of archiving." But there are dangers in such a position, Field said.

"By approaching memory in this conventional scientific or artefactual manner, you run the risk of excluding a wealth of information, which is arrogantly deemed as emotional, subjective, nostalgic and unmeasurable. If you are only looking for facts, then people's memories will sometimes give you facts and other times they will not.

"But if you are trying to understand how and why people believe what they believe, think what they think, and most crucially, why people act in the ways that they do, then people's memories are of vital significance."

Over the past two decades, researchers from a spread of disciplines have bucked conventional notions of memory, and have recorded everything from oral stories to township theatre pieces to family photographs.

Field also pointed to the tension between the "dynamic qualities of people's stories" and the ways in which they are "recorded, constructed, inscribed, lodged, catalogued and conserved".

"The overarching pursuit for archival conservation above all else raises the danger of forms of information being fixed in a timeless and closed-off manner," said Field. "This ironically a-historical fixing of information means that people's knowledge is dissected, sterilised and frozen-dead for posterity."

So while institutional archives should be "protected spaces for proper conservation practices", they also "need to be open-ended spaces for dialogues between multiple audiences and other places of memory", he observed. As such, archives must - as the Centre for Popular Memory strives to do with its books, radio programmes and audio-visual exhibits at community museums and libraries - maximise public access.

"Archives need to forge ongoing dialogues with the people and the communities whose stories we record and archive," Field said. "Just as archiving has the propensity to deny or let slip that which is dynamic and alive in people's memories, archiving is also alive with the possibilities for change."