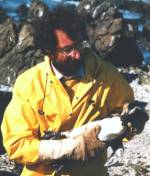 Author(ity) on penguins: Phil Whittington, UCT's "penguin man", found time to pen The Adventures of Peter the Penguin while busy with his PhD.


THE Avian Demography Unit's (ADU) Phil Whittington, who graduates this week, found time (after encouragement from friends and colleagues) to document the adventures of one of South Africa's most famous penguins while working on his PhD thesis.

His children's story, The Adventures of Peter the Penguin, hit the bookshops last year, shortly after the anniversary of the sinking of the bulk ore carrier, Treasure, which sparked the biggest mass rescue operations of sea birds in the world.

Whittington's work of fiction tells the story of this heroic penguin, who, with his friends(Percy and Pamela) swam from Port Elizabeth to Cape Town, after being translocated from their colonies to prevent them from becoming oiled.

According to the ADU's director, Professor Les Underhill, the work was a product of Whittington's scientific research, subtly interweaving scientific fact and observation. â€œThis is both a literary and scientific event,â€ he said at the book launch. â€œThe book also carries a strong conservation message.â€

Whittington has been closely involved with penguins for many years and first began writing stories on the birds during the many solitary hours spent observing them and working with them on Robben Island.

Having experienced first-hand the ravages wrought after the Apollo Sea and Treasure sank, his thesis documents movements, immigration patterns, age at breeding and survival rates of cleaned penguins, comparing the results to those penguins that were never oiled.

Whittington will do postdoctoral research on kelp gulls in Algoa Bay at the University of Port Elizabeth next year.

â€œThis is rather ironic as this species became my sworn enemy during my time spent working on the penguins!â€