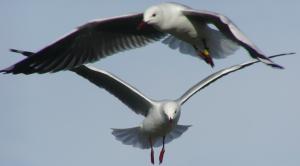 
IT WAS while conducting fieldwork on Dassen Island off the Cape west coast recently that postdoctoral researcher Marienne de Villiers spotted a Hartlaub's Gull (Larus hartlaubii) with two metal rings.

Co-worker Bruce Dyer from Marine and Coastal Management peered through binoculars to read the number while De Villiers enticed the gull closer with bread crumbs. He was able to read one of the rings completely as 564923, which allowed the gull to be identified.

This revealed a remarkable co-incidence. This gull had been ringed on Robben Island on June 12, 1976, by the late George Underhill, father of Professor Les Underhill, who is the ADU's director.

Hartlaub's Gulls breed in colonies and it is therefore possible to round up the chicks for ringing. Large numbers were ringed by George in the mid-1970s.

According to the ADU's Dieter Oschadleus, this gull is now the oldest known wild gull in southern Africa, with an age of 26 years 4.5 months.

Some gulls had been ringed with two metal rings on one leg and a plastic ring on the other, as part of an experiment to see how long the plastic rings would last. Needless to say, gull 564923 no longer had the plastic ring when spotted by De Villiers and Dyer.