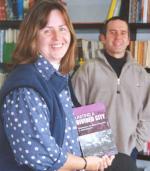 United front: Assoc Profs Sue Parnell (Environmental and Geographical Science) and Owen Crankshaw (Sociology) have teamed up with a colleague from the London School of Economics to produce a new book.


FOUR years' research by two academics from UCT and one from the London School of Economics (LSE) have been captured in a new book on Johannesburg, described as the â€œquintessential apartheid cityâ€, one divided by political, economic and social forces.

The co-authors of Uniting a Divided City: Governance and social exclusion in Johannesburg, husband and wife team Associate Professors Owen Crankshaw (Sociology) and Sue Parnell (Environmental and Geographical Sciences) and social policy specialist Jo Beall (Development Studies, LSE) have brought together their individual research on the city, which is seen as an international test case for urban reconstruction.

â€œIf you want to understand the urban future, look at Johannesburg,â€ Parnell confirmed.

The Joburg metropolis dominates the city-province of Gauteng, which is home to one third of South Africa's urban population of 21,8 million people. But uniting a divided city like Johannesburg is not a simplistic process of removing apartheid from the statute books,â€ Crankshaw noted.

The trio have tackled their analysis in four parts: examining various ways of understanding divided cities; dissecting the spatial structure of the city; highlighting institutional responses to urban changes; and looking at how people live in a divided city.

Though the study is on Johannebsurg, it could apply to other city. It thus has wider, international significance for how academics, practitioners and students can understand divided cities.

â€œConsider Sao Paulo, a city divided by transitions to democracy in Latin America, or Budapest, which reflects the decline in socialism in eastern Europe, or even Mexico City and Munbai. Change in all these cities was characterised by the same fears and responses as were found in South African cities following the end of apartheid,â€ Parnell noted.

â€œBut unlike these cities, Johannesburg was provided with an extraordinary opportunity to reinvent itself, by reforming its policies and planning practices and radically reconfiguring its social and political institutions in the wake of South Africa's celebrated transition, she continued.

The book is unusual in three respects. First, it is based on an exceptional assemblage of empirical data and analysis (it is the product of extended research conducted by the three between 1997 and 2001) and combines the resultant â€œmethodological richnessâ€.

Second, it combines a detailed knowledge of the particularities of the Johannesburg context with a broader understanding of how the city fits into international trends and debates. Third, the interdisciplinary nature of the collaboration has meant that the book reflects a range of research methods and analytical entry points.

â€œOur analysis of the divided city is one that stretches from a consideration of its economic structure to a concern with the social structures that infuse human relationships; from the formal and informal organisations and collectivities that constitute a city's governance, to the micro-level institutions that are constitutive of the everyday lives of its citizens,â€ said Crankshaw.

However, turning their research into the digestible format of a book required that the trio spend time writing together. Thanks to a SUNTORY Fellowship from the LSE, the venue proved to be an ancient French farmhouse (cheaper and nicer than London) where they spent hours â€œdoggedly bent over our laptops (no wine of course!)â€, to make the deadline ahead of the World Summit on Sustainable Development.

With the focus on Johannesburg for the WSSD, the book appeared timeously, shortly before the opening ceremony.